Phnom Penh (FN), Nov. 20 - Cambodian Ministry of Foreign Affairs and International Cooperation (MoFAIC) issued a press release on the outcomes of the ASEAN Connectivity Workshop on Increasing Awareness of the MPAC 2025 to relevant CLMV Agencies on 19-20 November 2018 in Siem Reap Province, Kingdom of Cambodia.

The Workshop was attended by more than 130 participants from relevant stakeholders, including government officials, academic, scholars and private sectors from CLMV countries, Thailand, the People’s Republic of China, ASEAN Secretariat, and the ASEAN-China Centre.

“The Workshop aimed to support the implementation of common priorities in MPAC 2025 and to contribute to promote closer coordination, cooperation and partnership among relevant stakeholders, including the Lead Implementation Body, National Coordinators and National Focal Points of each Strategic Area, line-ministries/agencies of the CLMV countries. It also provided opportunities to all relevant stakeholders a platform to share information, lessons learned and best practices in the implementation of the five Strategic Areas of MPAC 2025 such as Sustainable Infrastructure, Digital innovation, Seamless Logistics, Regulatory Excellence and People mobility,” according MoFAIC’s press release dated on 20 November 2018.

The Opening Ceremony of the Workshop was presided over by H.E. Mr. TAUCH Chankosal, Secretary of State and National Coordinator, Ministry of Public Works and Transport of Cambodia. Other high dignitaries attending the Opening Ceremony include H.E. Mr. KAN Pharidh, Secretary of State of Ministry of Foreign Affairs and International Cooperation and ASEAN-SOM Leader of Cambodia and Mr. POV Piseth, Deputy Governor of Siem Reap Province.

In his Opening Remarks, H.E. Mr. TAUCH Chankosal emphasized the importance of the MPAC 2025 in building ASEAN Community and how connectivity would help to benefit all ASEAN Member States. He underlined the vision for ASEAN Connectivity 2025 is to “achieve a seamlessly and comprehensively connected and integrated ASEAN that will promote competitiveness, inclusiveness, and a greater sense of Community.” He also stressed the importance for ASEAN Member States, especially the CLMV countries in sharing best practices and lessons learned in implementing the five Strategic Areas under the MPAC 2025 in their respective national context.

The Workshop adopted key recommendations for enhancing cooperation and coordination among all stakeholders, including at the grassroots level of their respective countries in order to promote the profile and awareness of the MPAC 2025. The participants also agreed to further strengthen their contacts and networking in the future, and to explore more opportunities to meet on a regular basis with an aim to further exchange views and information regarding the implementation of the MPAC 2025.
=FRESH NEWS 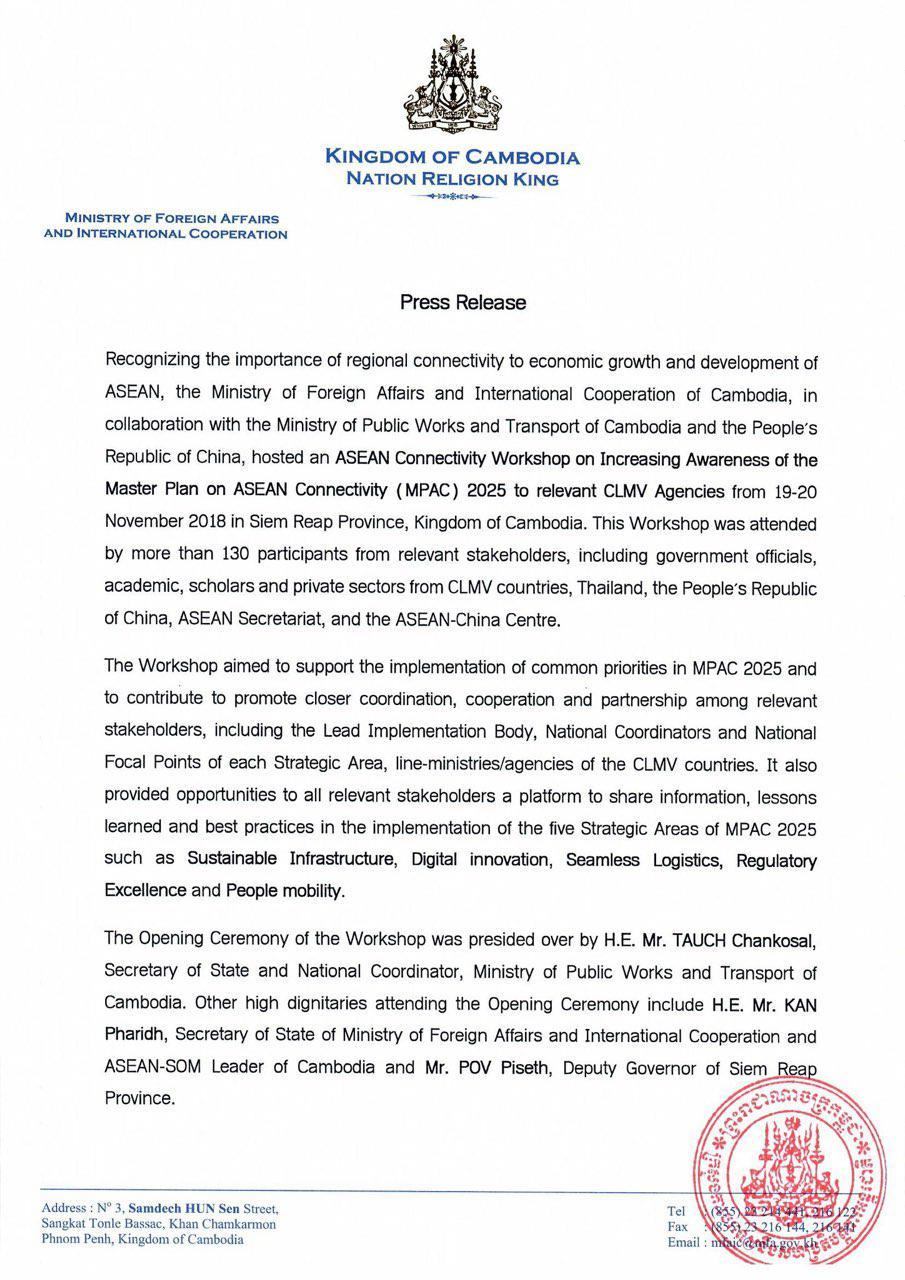