Rudd, Australian Labor Prime Minister from 2007 until 2010 and again in 2013, asked the federal government for endorsement in his bid to become the next secretary-general for the UN, but was denied following a cabinet meeting last Friday.

All candidates must be formally endorsed by their home government if they're to be considered by the UN.

In an interview with The Australian newspaper on Friday, Rudd said Turnbull's decision would "reflect poorly" on his government,  as he turned on his word and failed to endorse a countryman for the position.

"It's no small thing when the prime minister of Australia stands up and says that one of his prime ministerial predecessors is unsuitable to be considered as a candidate for UN secretary-general," Rudd told the Australian on Friday.

"I think that will reflect poorly on (Turnbull). I think it will."

Rudd spoke candidly about a lunch he had with both Turnbull and Turnbull's wife, Lucy, last year, in which the PM all but agreed that Rudd was suitable for the UN's top job.

"As I was heading out to get the car to the airport, this was quite explicitly stated: that the government would be mad not to support my candidature."

But Turnbull hit back at Rudd later on Friday, saying he stands by his decision to block the former PM's tilt at the UN, despite previously giving indication to Rudd that the government would support his bid.

"The facts are pretty clear and the decision was a correct one, " he told Macquarie Radio on Friday.

"At all relevant times he knew that this was a matter for the cabinet, he knew there would be no guarantee that he would be nominated if and when he asked for such a nomination."

Meanwhile, Defence Industry Minister Christopher Pyne backed up Turnbull's assertion, and said Rudd's "extraordinary" behavior following cabinet's decision was one of the reasons why the government decided to snub his bid.

"Since the announcement that we wouldn't nominate him for secretary-general of the UN he has underlined why he is not a suitable candidate, because his behavior has been quite extraordinary," Pyne told the Nine Network. 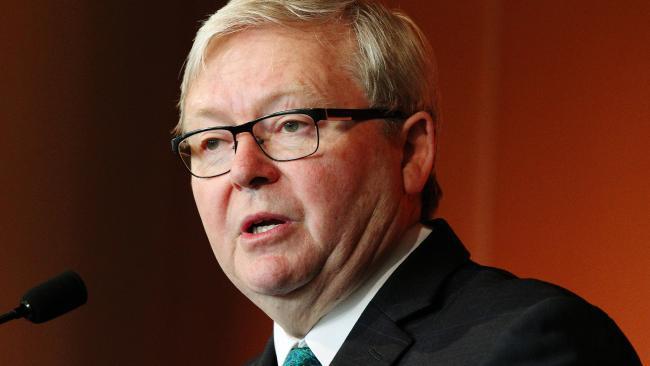