ISLAMABAD, Aug. 8 (Xinhua) — At least 30 people were killed and 50 others injured when a blast hit a hospital in Pakistan's southwest Quetta city on Monday morning, local Urdu media reported.

Dunya News said that the blast happened at about 9:50 a.m. local time when people were gathering to collect the body of a local law association chairman in the civil hospital of Quetta, the capital city of the country's southwest Balochistan province.

The slain lawyer Bilal Kasi was on his way to office when some unknown gunmen opened fire on his car in Manno Jan Road of Quetta.

The gunmen fled the scene after the attack.

Provincial health minister Rahmat Baloch said that the death toll is feared to rise further as 20 among the injured people are said to be in critical condition.

He said that the lawyers, who were gathering in the hospital to protest against the killing of their slain president, were target of the explosion.

Baloch said that some of the injured have been shifted to Bolan Hospital Quetta as the Civil Hospital ran out of beds and other services to accommodate the victims.

He said that a state of emergency has been declared in all hospital of the city to ensure the best possible medical treatment to the injured people.

Bomb disposal squad said that the blast might be carried out by a suicide bomber as they have found limbs from the blast site, but more investigations are being made to confirm the nature of the explosion.

A heavy contingent of police and paramilitary troops rushed to the site and cordoned it off for investigations.

Pakistani Prime Minister Nawaz Sharif condemned the blast and vowed to root out militancy from the country.

Following the attack, the lawyers in the province boycotted court procedures.

The explosion caused a chain reaction from the circles of lawyers from the country. 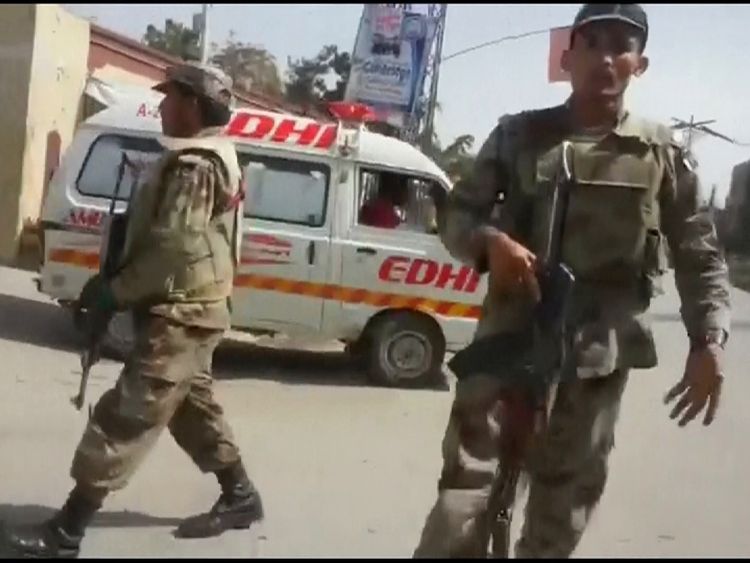