BEIJING, Aug. 11 (Xinhua) — Tensions between Russia and Ukraine have been escalating as Russian President Vladimir Putin on Wednesday accused Kiev of plotting terrorist attacks in Crimea and vowed to take additional measures to ensure the safety of infrastructure and citizens there.

"The people who seized power in Kiev ... have switched to terror tactics instead of searching for ways for a peaceful settlement," Putin told a news conference.

"The attempt to provoke an outbreak of violence, to provoke a conflict is nothing other than a desire to distract (Ukrainian) society from its problems," he added, calling Ukraine's actions "criminal."

"We will certainly do our utmost to ensure safety of infrastructure and citizens...(and) those will be serious additional measures and more than that," he said.

Earlier on the same day, the Russian Federal Security Bureau (FSB) said the country has prevented a series of terrorist attacks in Crimea planned by the Ukraine military intelligence service.

One officer died on the night between Aug. 6 and Aug. 7 during a clash with saboteurs and another serviceman was killed on Aug. 8, as Russian forces prevented two attempts of the special units of the Ukrainian Defense Ministry to penetrate Crimea from Ukraine which was covered by heavy shelling from the Ukrainian side, the FSB said in a statement.

However, Ukrainian President Petro Poroshenko said "Russian accusations towards Ukraine of terrorism in occupied Crimea sound as preposterous and cynical as the statements of the Russian leadership about the absence of the Russian troops in Donbass (region of Ukraine)."

Crimea, which was previously part of Ukraine, was incorporated into Russia in 2014 following a referendum, which was recognized by Moscow but rejected by Ukraine and Western powers.

Ukrainian National Security and Defense Council Secretary Oleksandr Turchynov said the claims were "hysterical and false," and the Ukrainian Defense Ministry termed the allegations as Moscow's attempt to justify its re-deployment and actions in the region.

Ukraine will ask the UN Security Council to hold an urgent meeting if tensions continue to rise over Russia's accusations, Ukraine's Ambassador Volodymyr Yelchenko on Wednesday told reporters at the UN headquarters.

"The convening of the Security Council is being considered," he said. "As soon as it comes to the point, we will do it immediately."

As a non-permanent member of the Security Council, Ukraine has the right to call a meeting on any matter considered to be a threat to international peace and security.

Since Ukraine joined the council in January, it has held only one meeting on the crisis in the country.

Ukraine, the United States and European governments have long accused Russia of arming and encouraging pro-Russian separatists in eastern Ukraine.

Former U.S. Ambassador to Ukraine John Herbst has said Ukrainian security forces have strengthened their military lines in eastern Ukraine and to the north of Crimea. 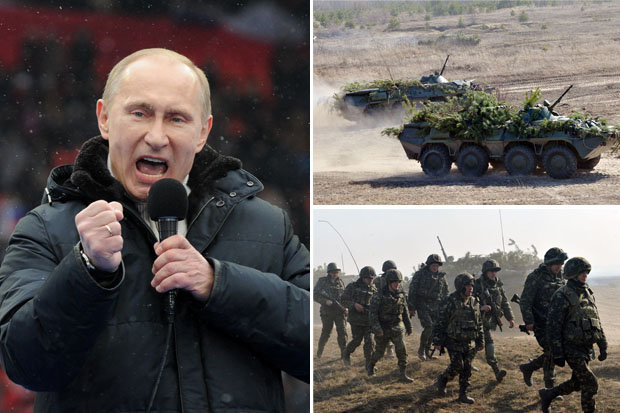