TOKYO, Aug. 23 (Xinhua) — The Japan Meteorological Agency (JMA) on Tuesday warned of high waves and extensive flooding brought on by heavy downpours as Typhoon Mindulle lashed swathes of northern Japan on Tuesday after wreaking havoc in the Kanto region, including the nation's capital.

According to the JMA, Typhoon Mindulle made landfall in the Hidaka Region on the southern coast of Hokkaido in the early hours of Tuesday morning and while being downgraded from a typhoon to an extra-tropical cyclone, the powerful storm as of 11 a.m. caused the issuance of an evacuation order for 9,000 people.

The evacuation order, the JMA said, came as rivers had burst their banks and others had become inundated, with the order spanning six districts across Hokkaido Prefecture in northern Japan.

Evacuation advisories, the weather agency said, had also been issued to a further 30,000 people across 18 districts in Japan's northernmost prefecture.

Local media televised incidents of torrential rain causing rivers to overflow in cities in central Hokkaido and the Hokkaido Railway Co. and the prefecture's New Chitose airport have both extensively canceled transportation services.

Three typhoons have wreaked havoc in east, northeast and northern Japan this year, marking a new record, with the first, Chanthu, hitting on Wednesday and the third, Kompasu, making landfall on Sunday.

Typhoon Mindulle, the ninth of the season, first hit south of Tokyo on Monday dumping more than 100 millimeters of rain per hour and packing winds of up to180 kph, with an atmospheric pressure of 975 hectopascals (hpa) at its center.

One person died as a result of the storm and scores were injured, as heavy winds and rain caused people to evacuate homes and vehicles, as dramatic pictures of trees and electric pylons crashing across train lines in central Tokyo were beamed across the nation.

Japan's public broadcaster NHK reported that a woman in a suburb just outside of Tokyo had died on Monday as a result of the typhoon, with officials saying she was swept away by flood water as she was riding her bicycle. A man in his 40s was killed in Hokkaido on Sunday, the Fire and Disaster Management Agency said, with his body found next to his flooded car.

More than 60 homes in and around Tokyo and Chiba Prefecture, in the Kanto region, were damaged by flood water and numerous roads across the region inundated, as the storm cut a path up the eastern seaboard on its way north, officials also said, with local and Shinkansen bullet train services as well as around 500 domestic flights cancelled in the capital.

The JMA said that as of noon on Tuesday, the storm was heading north-northeast over the Sea of Okhotsk at a speed of 75 kph, but warned that rainfall could reach 200 millimeters on the west coast of Hokkaido and 180 mm on the east coast through midnight, with warnings in place for landslides and sustained heavy downpours. 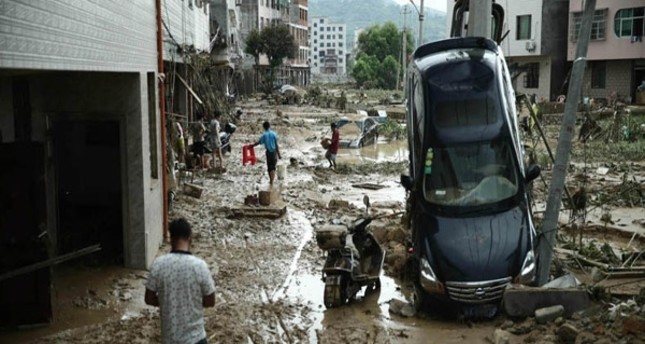