It said in a statement that Putin had informed the leaders of Germany and France of an incident at the border with Crimea, allegedly masterminded by Ukraine, in which two Russian servicemen were killed.

"The proclivity of Kiev for this kind of violence is detrimental to the Minsk process and cooperation in the framework of the Normandy format," the statement said.

The Normandy format is a diplomatic group of leaders from Russia, Germany, France and Ukraine set up to resolve the crisis in Eastern Ukraine in accordance with agreements reached in Minsk, the capital of Belarus.

After the incident, which Kiev denied being involved in, Putin said the reason behind it was Kiev's intention of avoiding implementing the Minsk agreements and to divert the attention of the Ukrainian people from social and economic problems.

The Kremlin added that the leaders of the three countries agreed to continue personal contacts on the Ukrainian issue and to hold a joint meeting on the sidelines of the upcoming G20 summit scheduled for early September in eastern China's Hangzhou city. 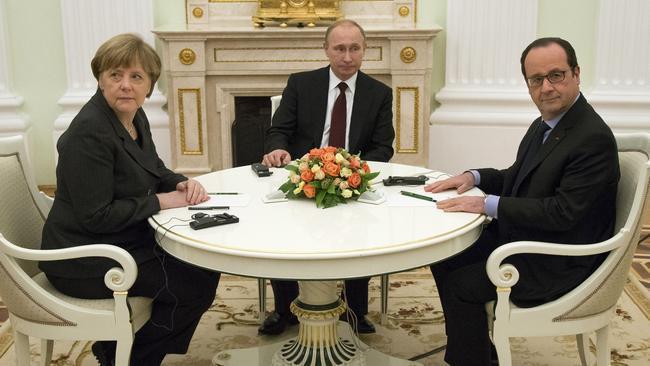