Hundreds rescued in North Carolina in wake of Hurricane Matthew

WASHINGTON, Oct. 11 (Xinhua) — Hundreds of people were rescued after floods from Hurricane Matthew, the most powerful Atlantic storm since 2007, inundated North Carolina towns on Monday.

Local reports said that about 1,500 people had to be rescued by boat and helicopter early Monday. Most of them were in knee-deep water, but some fled to rooftops as the floodwaters swirled around them.

The storm lashed Florida, Georgia, North and South Carolina and Virginia with heavy rain and wind after killing more than 900 people in Haiti.

The United Nations on Monday announced the launch of a near 120-million-U.S. dollar appeal to fund United Nations aid activities in the aftermath of Matthew attack in Haiti.

In the United States, the number of fatalities rose to at least 23, with nearly half in North Carolina. At least three people were missing.

The full extent of the disaster in North Carolina was still unclear, but it appeared that thousands of homes were damaged, and more were in danger of flooding.

The disaster declaration will provide assistance to affected residents in 10 North Carolina counties.

Officials have warned that life-threatening flooding from swollen rivers would continue for days.

"This is going to be a prolonged hurricane for us even though the skies are blue," North Carolina Gov. Pat McCrory said, pleading with residents to heed evacuation orders and to be careful.

Meanwhile, local electric companies said the number of homes and businesses without power at midday on Monday, after Matthew lashed the U.S. Southeast's Atlantic coast over the weekend, dropped to about 1.1 million.

That was down from a high of around 2.5 million on Sunday morning when the storm was still battering the North and South Carolina coasts.

The hardest hit utility was NextEra Energy Inc's FPL power company in Florida, which reported 958,100 customers affected by the storm. The FPL said on its website it had already restored service to about 903,900 homes and businesses.

The FPL said it was on track to restore service in the most severely damaged and flooded areas by the end of Monday.

Duke Energy Corp, meanwhile, said it could take a week to restore power to some customers in the hardest hit parts of the Carolinas because the utility will have to rebuild parts of its electrical system. 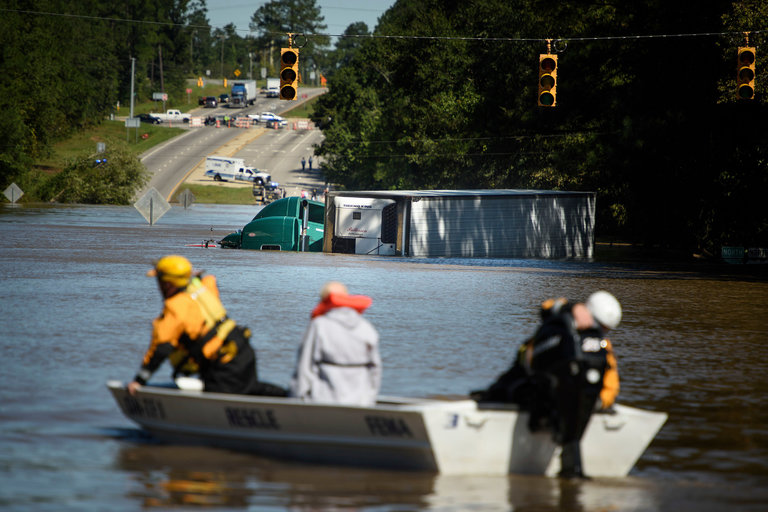