MOSCOW, Oct. 11 (Xinhua) -- Russian President Vladimir Putin has canceled his visit to France scheduled for Oct. 19 due to changes in the agenda, the Kremlin said Tuesday.

"The president has decided to cancel the visit, as some of the planned activities related to the opening of the Russian cultural and spiritual center and an exhibition, unfortunately, have been dropped out of the program," Kremlin spokesman Dmitry Peskov said.

But he added that Putin was ready to pay a visit to France "whenever it will be comfortable to (French) President (Francois) Hollande," while declining to specify the reason for changes in the program.

On Sunday, Hollande said in an interview with TMC television that he was still considering whether it would be useful to meet Putin in view of Russia' s alleged involvement in bombing civilians in Syria.

Russia on Saturday vetoed a France-sponsored drafted resolution on Syria at the United Nations Security Council (UNSC), and offered its own draft which was also not adopted by the UNSC.

Meanwhile, Peskov did not confirm Putin's participation in the meeting on the crisis in Ukraine with leaders of France, Germany and Ukraine in the so-called Normandy format scheduled for Oct. 19 in Berlin.

He only said that Russia was preparing for participation in such a meeting and will announce its date and time "as soon as we are ready." 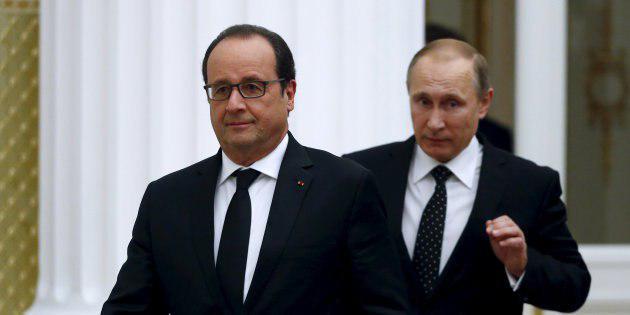