Despite the tiresome war of words, the showdown in Las Vegas seemed to be the only one of the three presidential face-offs in which the two candidates focused more on policies rather than each other's personality and history.

However, this is not assuring news for many after the two previous rounds of boisterous chair-hurling.

As expected, in face of the pervasive public anxiety about their country's direction, the two candidates' responses to policy-related questions were hardly constructive or convincing, and did not last long before policy exchanges were turned into nasty insults that even the moderator felt intolerable.

In a jaw-dropping trading of charges, the two nominees accused each other of being a puppet of Russia. The climax came when Trump refused to tell whether he would accept the outcome of this election.

For all its seriousness, the U.S. presidential debates have given place to a deplorable soap opera that no one would feel amusing.

More troublesome for the rest of the world is that both candidates, one of whom will lead the superpower in the next four years or more, have never shied away from scapegoating other nations for the U.S. social and economic woes, such as illicit immigration, mounting deficits, a shrinking middle class, rampant gun violence, racial discrimination and big money in politics.

By doing various sorts of convenient tricks, the two nominees managed to avoid putting forward effective solutions to save the problem-ridden United States.

As political polarization increasingly defines Washington's politics and policies, this campaign, coming at one of the most divisive moments in the U.S. history, is highly likely to prompt more nationalist or provocative domestic and international policies after the election day.

In defiance of establishment, Trump rose and roiled the deeply divided country. No matter whether he will win the election, the whirlwind he has blown in the race to the White House will not be easily dispelled. 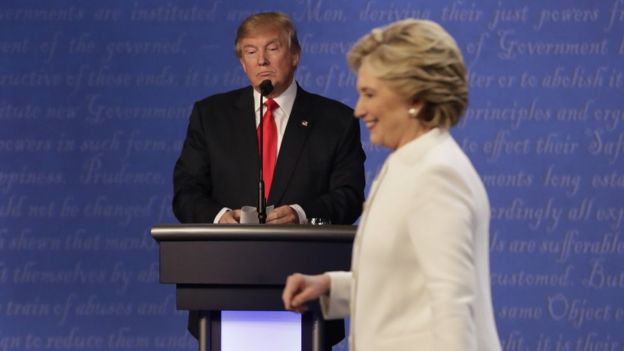