S.Korea to resume talks with Japan on intelligence-sharing pact against DPRK

SEOUL, Oct. 27 (Xinhua) -- South Korea will resume talks with Japan on adopting a pact to share military intelligence on the Democratic People's Republic of Korea (DPRK) after an aborted attempt four years ago, Yonhap news agency reported on Thursday.

An unnamed South Korean government official was quoted as saying Seoul will resume a working-level dialogue with Japan soon about the bilateral intelligence-sharing accord to effectively respond to the DPRK's nuclear and missile threats.

The decision was allegedly made during the national security council (NSC) meeting in the presidential office to sign the pact called General Security of Military Information Agreement (GSOMIA).

Former President Lee Myung-back pushed to seal a hush-hush military deal with Japan in 2012, but it was scrapped at the last minutes on public outcry over the closed-door attempt to endorse the intelligence-sharing agreement.

Under the deal, South Korea and Japan would directly exchange military intelligence on the DPRK's nuclear and missile programs. Under the trilateral military pact signed in late 2014 with the United States, Seoul and Tokyo have shared intelligence in an indirect way.

Yonhap reported that the bilateral accord could be sealed within this year, but oppositions are expected as Japan has yet to show its sincerity and repentance over past atrocities during the World War and its colonization of the Korean peninsula.

Victims of Korean women who were forced into sexual slavery by the Japanese military during the devastating war, euphemistically called "comfort women," still call on the Japanese government to make a sincere apology and compensate for brutalities they suffered under Japan's 1910-45 colonial rule.

Japan has repeatedly lodged territorial claims over a set of disputed islets, called Dokdo here and Takeshima in Japan that lies halfway between the two countries.

The islets have been controlled by South Korea since its liberation in 1945 from the Japanese colonization. Seoul claims Dokdo belongs to its territory historically, geographically and under international law as the sparsely inhabited islets were incorporated into Japan's territory after the colonization.

Many South Koreans see the recurring territorial disputes and the comfort women issue as signs that Japan is not entirely repentant of its colonial past. 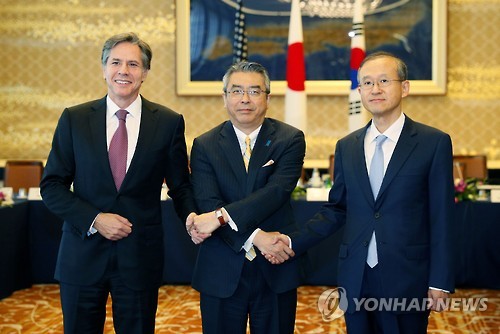