SEOUL, Nov. 3 (Xinhua) -- South Korean Justice Minister Kim Hyun-woong said Thursday that he would propose an investigation into President Park Geun-hye if necessary for the ongoing probe into a scandal surrounding Choi Soon-sil, the president's longtime confidante suspected of intervening in state affairs.

Kim told lawmakers that he would recommend an investigation into President Park after reviewing its necessity and possibility if it is necessary for getting down to bedrock in accordance with the development of the ongoing prosecutors' probe into the Choi Soon-sil scandal.

The justice minister said that if President Park volunteers for it, there would be no limitation to the investigation though he noted that a majority of law experts claim no legal ground for search and seizure toward the president theoretically.

Under the country's constitution, a president cannot be criminally indicted during his or her presidency except for treason charges. Some of law experts claim the president can be investigated on condition that the criminal prosecution is suspended by the end of presidency.

Reversing his Oct. 27 remarks that President Park cannot become a subject of criminal investigation, the justice minister opened the door for a probe into the president amid escalating public furor over the behind-the-curtain big shot.

Calls mounted that President Park should be investigated over a scandal of Choi who is accused of peddling undue influence and pulling strings behind the scenes as the 60-year-old private citizen's interference with government affairs could not happen without the president's protection and connivance.

Park's approval rating fell to 9.2 percent, according to a Naeil Shinmun newspaper survey conducted on Oct. 31. It was down 25 percentage points from a month earlier, hitting a record low since Park came to power in February 2013. 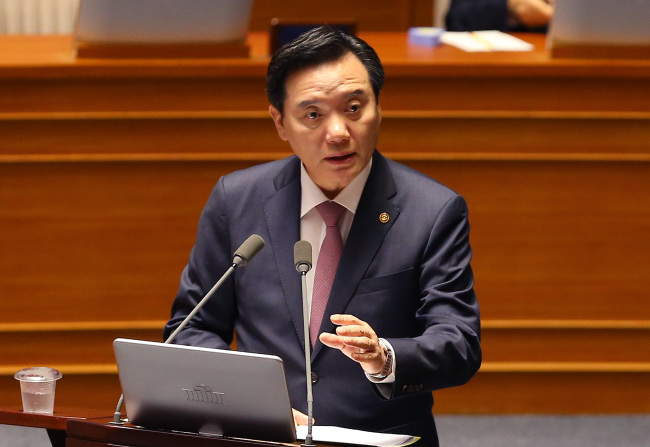