The government has put together a package of proposals to promote national stability and will be submitting it to the negotiators, President Nicolas Maduro said during a regularly scheduled radio broadcast.

"It is a very complete document that we are going to explain to the nation in the next few days, a document that I think will please the great majority of Venezuelans who want peace, who want work," said Maduro.

The document, with the theme "For a process of dialogue for peace, economic prosperity, social contentment, and national sovereignty. Let's build consensus for the peace and life of the country," is to be delivered to the negotiating tables, each of which is discussing a different point of contention.

Maduro said the government will also submit a video compiled by filmmakers and university students around the country, which depicts the opposition's "campaigns of hatred (and) intolerance, which have crossed the boundary of what is normal, what is allowed, what is legal."

Anti-government protests in the past have led to fatal clashes and the imprisonment of opposition leaders for inciting violence.

Maduro also called for "patience, perseverance, democratic attitude (and) a capacity for understanding," for national dialogue to succeed.

On Thursday, Venezuela's conservative opposition gave the government a Friday deadline to either set a date for a presidential recall referendum or move up presidential elections.

Maduro rejected the ultimatum, and urged the coalition of right-wing parties, known as the Democratic Unity Roundtable (MUD), to stick to dialogue. 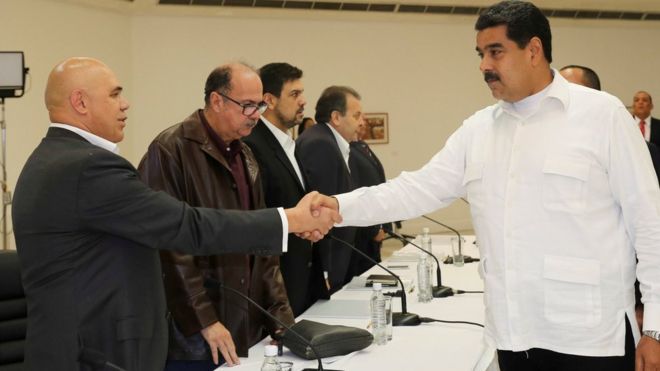