4 killed in blast in U.S. Bagram airbase in Afghanistan

KABUL, Nov. 12 (Xinhua) -- Four people were killed and 14 others injured in a blast inside Bagram Airfield in Afghanistan's eastern province of Parwan early on Saturday, sources said.

"On November 12, an explosive device was detonated on Bagram Airfield resulting in multiple casualties. Four people have died in the attack and approximately 14 have been wounded. We will provide updates as appropriate," the NATO-led Resolute Support (RS) said in a statement.

The Bagram Airfield, some 50 km north of Afghan capital of Kabul, has been serving as a main U.S. military base in Afghanistan over the past 15 years.

Earlier on Saturday, a provincial government spokesman told Xinhua that the nature of the blast was a suicide bombing.

"The initial probes found that a man disguised as a daily worker made his way to pass the first checkpoint of the base and detonated his explosive jacket inflicting casualties," spokesman Wahid Seddiqi told Xinhua.

As the identities of the casualties were not immediately known, unofficial sources said the victims were local workers who were waiting to pass through a gate.

The blast occurred at about 5:30 a.m. local time, according to RS.

"Response teams at Bagram continue to treat the wounded and investigate the incident," the RS statement said.

Zabiullah Mujahid, a purported Taliban spokesman, claimed responsibility for the attack. He twitted that the attack was part of the insurgent's yearly rebel offensive. 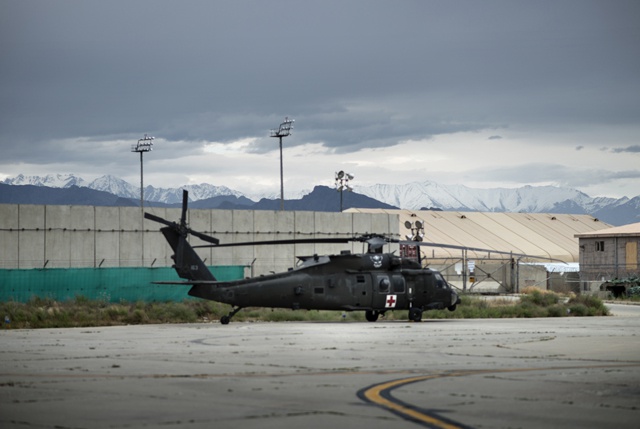