The NH-90 helicopters were deployed to deliver emergency supplies and evacuate stranded tourists and residents after Monday's deadly 7.5-magnitude quake triggered massive landslides that wiped out road and rail links to the South Island town.

Some flights early Tuesday were delayed by weather conditions, but by early evening about 140 people had been evacuated and the air force expected to fly almost 200 people to Christchurch by last light, said Wing Commander Scott McKenzie.

"The earthquake has cut off land access to Kaikoura and disrupted power and water supplies. So we've been delivering food, water, diesel fuel and other basic necessities the entire day, and evacuating people out of there," McKenzie said in a statement.

New Zealand navy offshore patrol vessel HMNZS Wellington was on its way to the Kaikoura coast to conduct seabed surveillance to determine whether navy supply ship HMNZS Canterbury would be able to dock at Kaikoura or would have to anchor offshore.

Both vessels are expected to arrive early Wednesday.

Defence Minister and Acting Civil Defence Minister Gerry Brownlee said the evacuees have been taken to Christchurch, where authorities had been helping make arrangements for affected tourists.

It was hoped that land routes to the south of Kaikoura could be cleared and reopened by the weekend.

"This is heavily dependent on weather conditions in the area and the magnitude and frequency of aftershocks," Brownlee said in a statement.

"Cell phone and landline coverage in Kaikoura is improving and providers are coordinating well, but services are not yet at 100-percent functionality, meaning communications remain challenging at times," he said.

"The total number of people displaced by the magnitude 7.5 earthquake and subsequent landslides and disruption is yet to be confirmed, but more information about emergency accommodation needs is being sought."

The New Zealand military on Tuesday accepted offers of help from U.S. and Japanese forces in its relief operations.

The U.S. Navy had offered two MH60 helicopters aboard its destroyer USS Sampson, which was currently in New Zealand waters for celebrations to mark the 75th anniversary of the New Zealand navy.

The U.S. had also offered the use of a P-3 Orion aircraft to help with surveillance flights.

About 1,000 tourists were thought to be stranded in Kaikoura, a popular tourist destination famed for its coastal scenery and whale-watching activities.

The town and the surrounding area have been shaken by hundreds of aftershocks some of them severe.

Two people died in Monday's quake: one in a collapsed house in Kaikoura and another at a property at Mount Lyford, north of Christchurch. 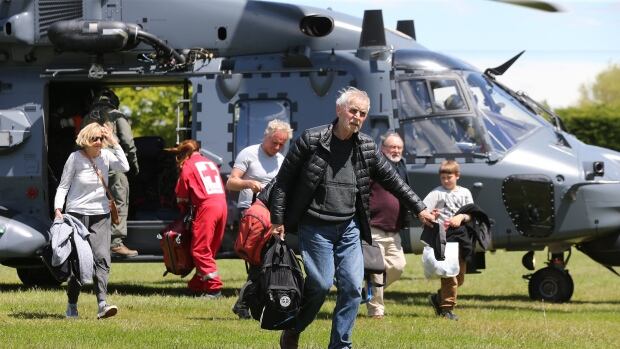