MELBOURNE/SYDNEY, Jan. 20 (Xinhua) -- A man is in custody after a car intentionally hit several pedestrians in Melbourne's CBD, killing three people and leaving up to 20 with serious injuries.

A maroon colored Sedan was being pursued by police in Melbourne's CBD when the vehicle entered a pedestrian-only section of the famous Bourke Street shopping mall, driving erratically along the popular strip.

In a statement, Victoria Police confirmed a number of people had been injured in the incident.

"A man has been arrested following an incident in the CBD this afternoon," Victoria Police said.

"At this early stage it is believed a man driving a vehicle has struck a number of pedestrians in the vicinity of Bourke and Queens Streets just before 2 p.m..

"Emergency services are assisting multiple patients but at least one person has been confirmed deceased."

Victoria Police said on Friday afternoon that the incident was not related to terrorism.

Rebecca Russo, a witness of the chase, said she saw three people hit by the car as it sped through the mall.

"We were just standing on Bourke Street, and we heard a bit of a crash coming from the mall. I saw a maroon car driving up the pedestrian path on the Flinders Street side," Russo told Fairfax Media on Friday.

"People were running out of the way, they were going very, very fast. I saw him hit a few people. I saw bodies flying into the air."

Ambulance Victoria confirmed that 20 people were being treated as a result of the incident with four of those being children.

Images shot by a helicopter over the CBD showed the wrecked vehicle in the wake of the incident with part of a child's pram on the bonnet with unconfirmed reports that a three year old child in the pram was dragged up to 100 meters by the car.

There were unconfirmed reports on Friday afternoon that shots were fired as the chase unfolded.

One witness said that dozens of police were onto the driver quickly.

"I was just down on the corner and I just heard two gunshots and I just thought it was one of those cars that makes a similar sound," the witness told Australian Broadcasting Corporation (ABC) radio on Friday.

"Then I heard yelling and screaming and saw the special unit squad car and all of a sudden saw all the armed officers running towards the car, and by the time I got to the vehicle they were all on top of him already."

Victoria Police said the incident was related to a stabbing in the south-eastern suburb of Windsor at 2 a.m. local time on Friday morning.

The victim of the stabbing remained in hospital in a critical condition on Friday.

Bill Shorten, leader of Australia's Federal Opposition, wrote on social media "Horrific scenes in Melbourne this afternoon. Hearts go out to all those who've been hurt,"

Footage posted by witnesses on social media showed the vehicle driving erratically in circles on the intersection outside Melbourne icons Flinders Street station and Federation Square as pedestrians ran for their lives.

The incident occurred as thousands of tourists were in Melbourne for the Australian Open.

Police asked that people stay out of the CBD on Friday as the investigation into the incident continued. 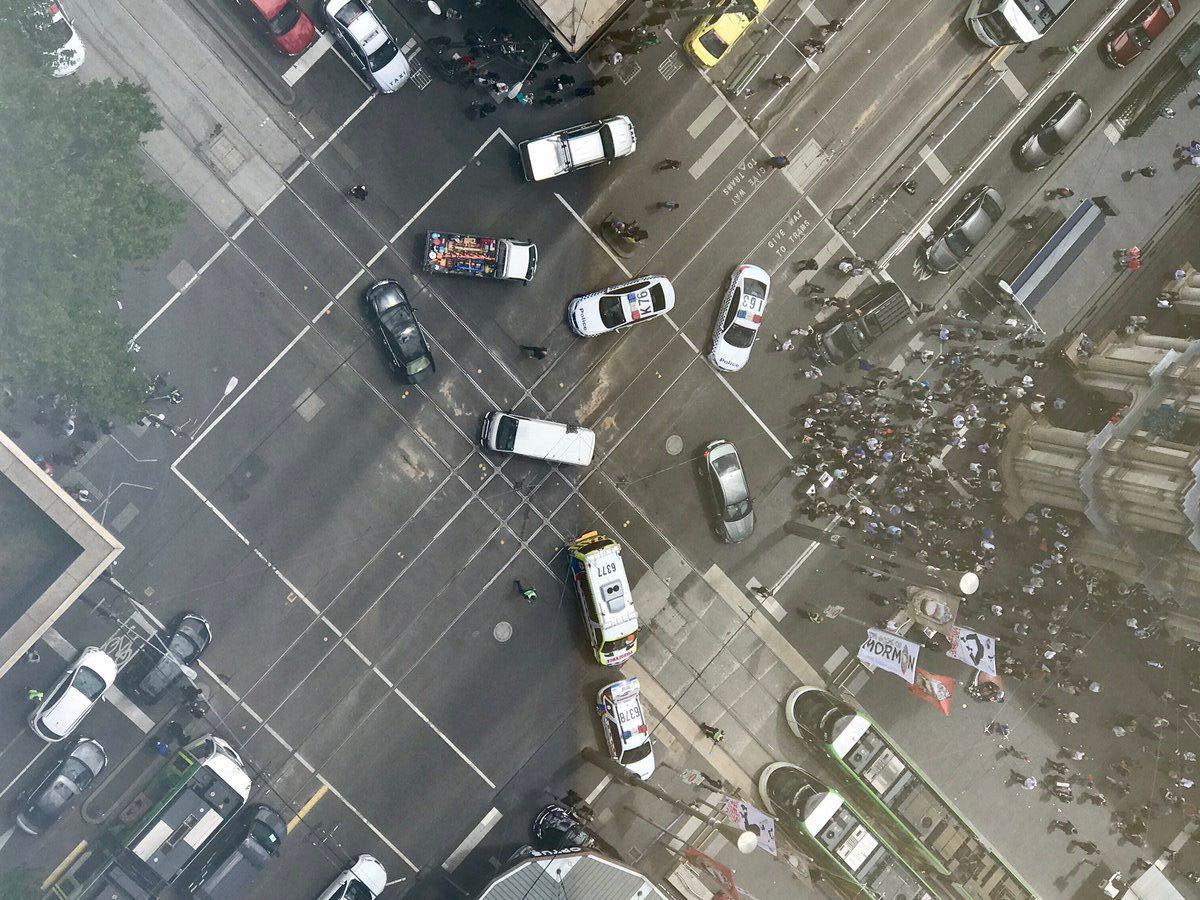