The independent counsel team had requested a face-to-face interrogation of President Park next Monday or Tuesday, but the presidential office Cheong Wa Dae wanted to delay it to between Wednesday and Friday for further preparations, the newspaper said without elaborating on sources.

The exact date has yet to be set. If conducted, Park would become the first sitting South Korean president to be probed by prosecutors.

The face-to-face interview would reportedly be conducted in the "third place" except for the independent counsel team's office and the presidential Blue House. The interrogation will not be made public to local media outlets.

Lee Kyu-chul, spokesman of the special prosecutors, told a regular press briefing Tuesday that nothing has been decided yet though it is true that the team is discussing with the presidential office about the date and the place for the interrogation.

The special prosecutors are widely expected to raid the presidential office this week before grilling the president.

The Cheong Wa Dae had allegedly opposed the raid for reasons of possible leakage of top secrets, but some of local media speculated that it allowed Park to buy time for the destruction of key evidences.

Counsel spokesman Lee told reporters that if evidences were destroyed, it would be revealed through search and seizure, stressing the need to search the presidential office.

The special counsel team, which was launched on Dec. 21, is scheduled to terminate on Feb. 28. If Prime Minister Hwang Kyo-ahn, who is serving as the acting president, approves an extended investigation, it can continue its probe for 30 more days.

President Park had refused to be quizzed by general prosecutors, who identified the president as an accomplice to her longtime confidante Choi Soon-sil who is at the center of the influence-peddling scandal.

The first South Korean female leader has also refused to appear in the constitutional court's pleading session, and instead held a meeting with press corps of the presidential office on the New Year's Day to claim her innocence in the case.

Before the lunar New Year's holiday, Park had an interview with a conservative Internet podcast, evoking public criticism for her reluctance to appear in court and to be investigated by prosecutors. 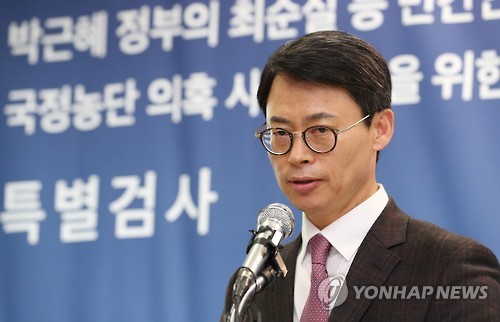