UNITED NATIONS, Feb. 21 (Xinhua) -- Food crisis could worse with poor rainy season after drought has displaced more than 135,000 people inside Somalia since November, a UN spokesman warned here on Tuesday.

Farhan Haq, the deputy UN spokesman, made the statement at a daily news briefing here, citing data compiled by the UN refugee agency (UNHCR), the Norwegian Refugee Council and other community-based organizations.

"Swift, substantial action and adequate funding are urgently needed to avoid famine and a repeat of 2011, when some 250,000 people died, more than half of them younger than five years old," Haq said.

In a joint statement, the World Food Programme (WFP) and the Food and Agriculture Organization (FAO), along with the European Commission's Joint Research Centre and the Famine Early Warning Systems Network, warn that the country's food crisis could be further exacerbated by a poor rainy season in 2017.

The main rainy season in Somalia, referred to as the Gu, lasts from April to June. This period is characterized by the southwest monsoon, which rejuvenate the pasture land, especially the central plateau, and briefly transform the desert into lush vegetation.

According to the UNHCR, drought is also pushing some to flee the Horn of Africa country. Since the start of the year, more than 3,770 Somali new arrivals have been recorded at Melkadida in Ethiopia, and acute malnutrition has been reported in around 75 percent of arriving child refugees.

According to the authorities in Puntland, more than 20,000 families have moved to the Bari region while 1,638 others are in need of emergency assistance in the northern town of Galkayo.

According to the report, people are leaving their homes because of the drought, rising food prices, dry weather forecasts, and ongoing insecurity and are heading for urban areas. 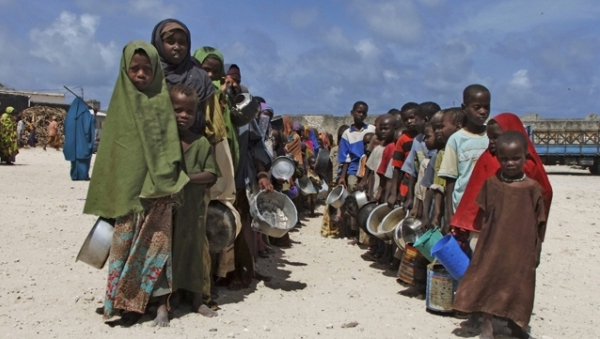