WASHINGTON, Feb. 23 (Xinhua) -- Iowa Governor Terry Branstad, U.S. President Donald Trump's pick for Ambassador to China, said on Thursday that he would work to ensure the continued growth of U.S. agricultural exports to China when he begins his new job, particularly reopening the Chinese market for American beef.

U.S. agricultural exports to China have grown more than 200 percent over the past decade and China was the United States' second-largest international market in 2015, according to the U.S. Department of Agriculture.

China has already imported more U.S. soybeans than all the rest of the world combined, and the world's second-largest economy has become a major importer of American pork as well, the governor said, noting that "multi-billion dollar soybean contracts between the United States and China have become a commonplace" .

In terms of his priorities as U.S. Ambassador to China, Branstad said he hoped China to reopen the market for American beef "soon". China halted beef imports from the United States in 2003 to prevent the spread of mad cow disease.

"Mad cow disease is long since gone in this country, and there is no reason why the Chinese should continue to restrict American beef," he said. "I want to serve it in the embassy, and I certainly want to do what I can to try to convince the Chinese leadership to do that sooner rather than later."

Branstad also said he would leverage his "longstanding relationship" with Chinese officials to gain Beijing's quicker approval of genetically modified U.S. corn traits, believing that the "friendship and trust" could help bring down some of the barriers to increase bilateral agricultural trade.

Asked about Trump's "American Frist" trade policy, Branstad downplayed the potential trade disputes between the U.S. and other countries, emphasizing that Trump was a deal-maker and businessman.

"Long time ago, he wrote a book called the Art of the Deal. He is a businessmen, and the best deal is a win-win situation," the governor said, referring to Trump's bestselling book first published in 1987.

"I'm hopeful at the end of the day that the president and his administration will work to improve bilateral agreements and in fact enhance our ability to export," he said. "So it's a matter of trying to negotiate the best deals for America, but in a way that's going to be a win-win for trading partners as well."

Branstad, 70, is the longest-serving governor in the U.S., who also has long nurtured a close relationship with China and has visited China multiple times. He served as the governor of Iowa in 1983-1999, and again since 2011. He was nominated by Trump to be the next U.S. Ambassador to China in December 2016. 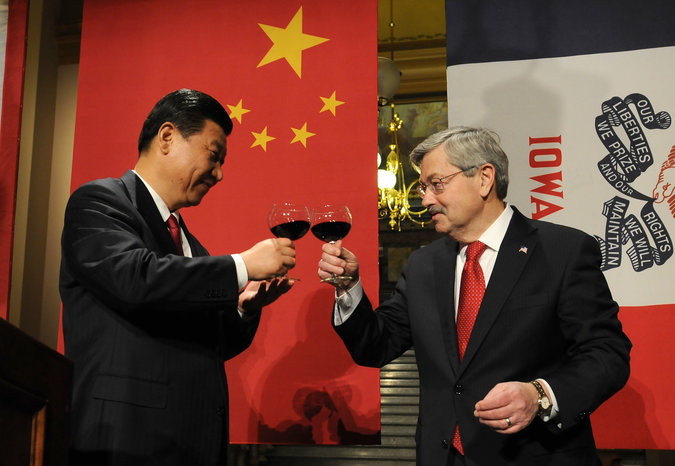