SEOUL, March 10 (Xinhua) -- Two of South Korean participants died in a pro-Park Geun-hye rally held outside the constitutional court, according to local media reports on Friday.

Earlier in the day, the court unanimously upheld the motion to impeach President Park that was passed on Dec. 9 in the parliament. Park became the first South Korean leader to be ousted through the impeachment.

Right after the decision, some of enraged Park loyalists rushed to the wall of police buses that had been placed in line to prevent protesters from entering the court building.

Some swung lumbers, with another hitting his own head on the police bus, TV footage showed. Some vandalized the police buses, while others were pulling ropes tied to the buses.

Over 10 protesters were taken to a nearby hospital. Among them, two passed away there and one was in a critical condition, according to local media reports. The dead are known to be in their 60s and 70s.

Thousands of Park supporters have held rally outside the court. Tens of thousands of police forces were mobilized around the court and the presidential office.

The violent protests have come to a state of lull since about 1:50 p.m. local time. 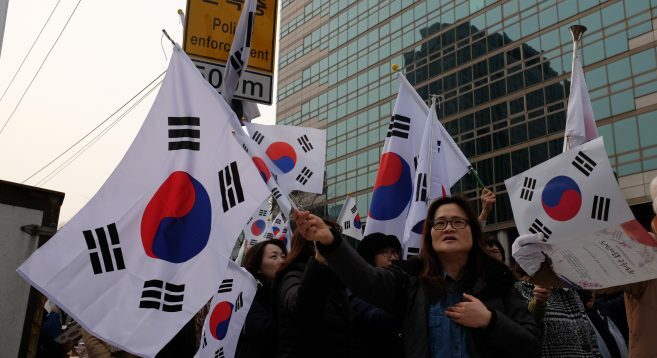