PUTRAJAYA, Malaysia, March 28 (Xinhua) -- Visiting French President Francois Hollande pitched the sale of French-made fighter jets to Malaysia during his brief stay in Malaysia on Tuesday, but Malaysian Prime Minister Najib Razak said they are "not ready to make a decision."

In a joint press conference after an one-hour bilateral meeting, Najib acknowledged that Malaysia is a big procurer of French equipment, adding Malaysia is aware of French-made aircraft Rafale's success in several countries.

Since Malaysia proposed to replace its outdated Mig-29N fighter jets with the so-called multi-role combat aircraft, major defense companies including Dassault Aviation from France, BAE Systems from Britain and Saab from Sweden have proposed their products.

During the Langkawi International Maritime and Aerospace Exhibition in Malaysia last week, Dassault Aviation, the maker of Rafale, signed a memorandum of understanding with the National Defense University of Malaysia, part of their lobbying efforts to push the deal. Aerial display using the Rafale F3b was also staged during the exhibition.

Hollande, the second French president to visit Malaysia since Jacques Chirac, said at the press conference that "Rafale is the best jet in this category, but of course we have to discuss the prices and specifications." "I trust the decision you make when the time comes," he said via a on-site interpreter.

It is not sure when the Malaysian government will make the final decision, but Malaysia has a long history of defense cooperation with France. The delivery of the fourth Airbus A400m transport aircraft recently makes Malaysia the largest non-NATO customer of the plane. Malaysia also bought French-made submarines in the early 2000s.

At the press conference, Najib said defense and security cooperation with France is "the mainstay" and "the most significant part" of their bilateral relations.

The two leaders also talked about French car maker Peugeot's interest in buying stakes from Malaysia's Proton, which is seeking a foreign partner after years of losing money.

Najib said Peugeot is conducting serious negotiations with Proton. "It's not concluded yet, but that's something which could be a possibility," he said.

Malaysia is the second stop of Hollande's three-nation tour in the Southeast Asian region, which also include Singapore and Indonesia. 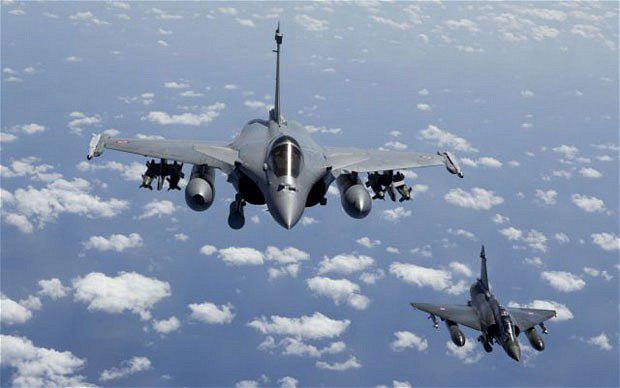