NEW YORK, June 30 (Xing) -- A former hospital employee shot dead a doctor, wounded six others before killing himself on Friday at a hospital in the Bronx, a borough of New York City, officials said.

The gunman acted alone, and it appeared to be a workplace dispute that ended in a suicide, said Mayor Bill de Blasio at a joint news conference with Police Commissioner James O'Neill in front of the Bronx-Lebanon Hospital after the incident.

It was an "isolated incident," and not an "act of terrorism," Blasio said, yet it was a "horrific situation unfolding in the middle of a place people associate with care and comfort."

The shooting took place at around 2:55 p.m. local time inside the hospital. The male shooter, armed with an assault rifle, opened fire on the 16th and 17th floors of the hospital at 1650 Grand Concourse on Friday afternoon, according to O'Neill.

"One doctor is dead and there are several others who are fighting for their lives right now," he said.

The shooter, who was identified as former hospital employee Henry Bello, who was later found dead on the 17th floor, and an assault rifle was found beside him, O'Neil added.

The commissioner said that the gunman wore a white lab coat,and had tried to set himself on fire before turning the gun to himself.

A female victim was found on the 17th floor, and was pronounced dead on scene. A total of the six wounded people, including five seriously injured, were found on the 16th floor and were moved to the emergency rooms of the hospital, he said.

According to local reports, Bello was going to be dismissed by the hospital but instead chose to resign, after he was accused of sexual harassment.

Friday's shooting is the latest gun violence that has plagued the U.S. for many years. On June 14, U.S. House Republican Whip Steve Scalise and four others were wounded by a gunman at a congressional baseball practice field. 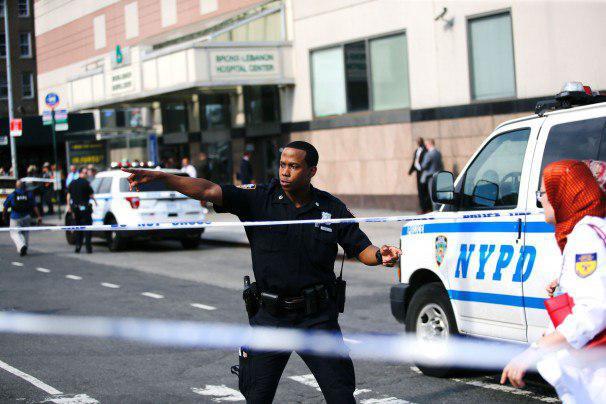