Jupiter's Great Spot is a 16,000-km-wide storm monitored since 1830 and possibly existing for more than 350 years.

Just days after celebrating its first anniversary in Jupiter orbit on July 4, the spacecraft reached perijove, the point at which an orbit comes closest to Jupiter's center, on Monday at 6:55 p.m. PDT (July 11, 0155 GMT).

According to NASA, at the time of perijove, Juno was about 3,500 km above the planet's cloud tops. Eleven minutes and 33 seconds later, Juno had covered another 39,771 km and was passing directly above the coiling crimson cloud tops of the Great Red Spot. The spacecraft passed about 9,000 km above the clouds of this iconic feature.

"For generations, people from all over the world and all walks of life have marveled over the Great Red Spot," Scott Bolton, principal investigator of Juno from the Southwest Research Institute in San Antonio, said in a statement. "Now we are finally going to see what this storm looks like up-close and personal."

All of Juno's science instruments as well as its imager, JunoCam, were operating during the flyby, collecting data that are now being returned to Earth. Juno's next close flyby of Jupiter will occur on Sept. 1, NASA said.

On July 4, Juno has logged exactly one year in Jupiter orbit. At the time, the spacecraft has chalked up about 114.5 million km in orbit around the giant planet.

Juno's name comes from Roman mythology. The mythical god Jupiter drew a veil of clouds around himself to hide his mischief, and his wife, the goddess Juno, was able to peer through the clouds and reveal Jupiter's true nature.

The spacecraft was launched on Aug. 5, 2011 (UTC), from Cape Canaveral Air Force Station in Florida. Without doubt, the 1.1-billion-dollar mission will provide answers to many questions about Jupiter, and help reveal some secrets about other planets in our solar system, including Earth.

Early science results from the Juno mission portray the largest planet in our solar system as a turbulent world, with an intriguingly complex interior structure, energetic polar aurora, and huge polar cyclones, according to NASA. 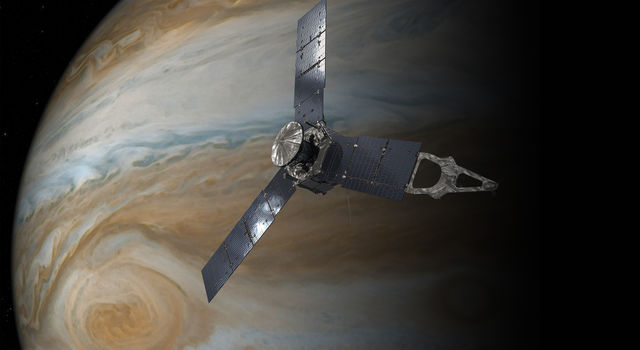