Phnom Penh (FN), August 20 - The Cambodia Daily is facing the prospect of being shuttered and having assets frozen if the state fails to receive back taxes by September 4, 2017, according to H.E. Kong Vibol, General Directorate of General Department of Taxation (GDT).

The Daily’s current owner, Deborah Krisher-Steele, confirmed that she had received notice from the GDT.

She claims that she was unaware of the debt when she purchased the company from her father.

The GDT has rejected her protest on the grounds that the purchase of the company included ownership of both assets and liabilities.

Bernard Krisher, the Daily’s former owner, claimed that the Daily had started as a non-profit project—but not an NGO.

This response was also rejected by the GDT as the Cambodian Daily has other commercial advertising.

“The Cambodia Daily has responded twice, but was found to be unacceptable. If The Cambodia Daily doesn’t pay its taxes by September 4, 2017,  the GDT will issue an official letter confirming that Cambodia Daily is subject to tax liabilities and will begin to implement the foreclosure of the company," said H.E Kong Vibol.

After documents from the General Department of Taxation leaked, Ou Chanrith, a member of Cambodia National Rescue Party (CNRP) posted a message on Facebook that Cambodia Daily Newspaper Company alleging that the media outlet had failed to pay taxes for over a decade, racking up a whopping 25,756,015,695 riels, approximately 6 million US dollars, in back taxes.
=FRESH NEWS 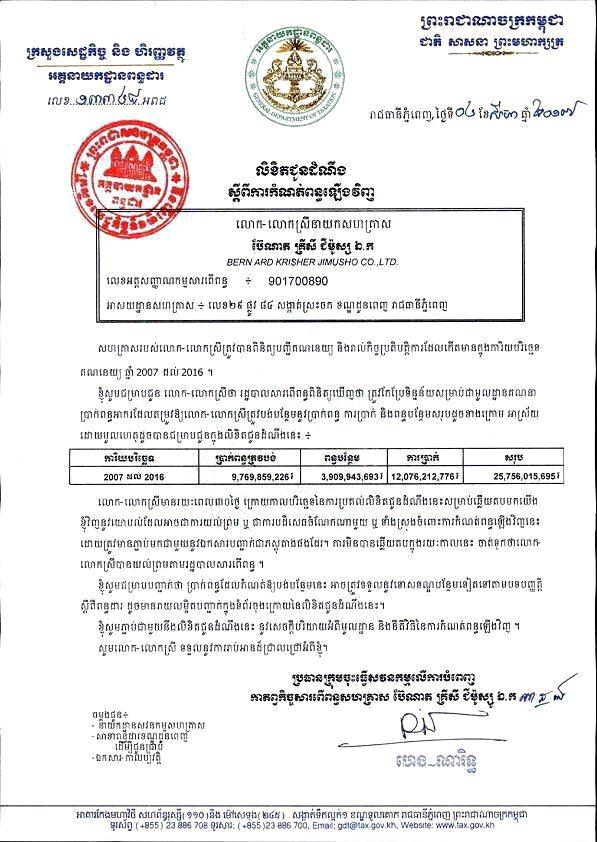