TOKYO, Oct. 18 (Xinhua) -- Flight operations of the U.S. Marine Corps CH-53E transport helicopters were resumed Wednesday amid local protests and opposition from the central government, following the crash of one of the choppers a week earlier in Okinawa.

According to local media reports, a CH-53E took off Wednesday morning from the U.S. Marine Corps Air Station Futenma in Ginowan, Okinawa, where the helicopters are based.

Despite the U.S. Marines confirming on Tuesday the safety of the CH-53Es, the resumption of the helicopters' flights has drawn harsh criticism from both local and central governments who had been waiting for further clarification on the safety of the choppers.

Okinawa Governor Takeshi Onaga said in a statement that the U.S. military's decision was "reckless and utterly intolerable."

He added the U.S. military had "failed to clarify the cause of the CH-53E's crash-landing a week ago and what measures would be taken to ensure that such a mishap does not occur again."

Japan's Defense Minister, Itsunori Onodera, reiterated Onaga's sentiments in saying that a full explanation of the helicopter's crash had not been provided by the U.S. military nor the reason why it believed the helicopters were safe to fly again.

"It is extremely regrettable that the same type of helicopter as the one that crash-landed is flying again when the central government has not been provided with sufficient information as to why the U.S. military had judged CH-53Es were safe to operate," Onodera told a press briefing in Tokyo.

While Lt. Gen. Lawrence Nicholson, the commanding general of U.S. Marine Corps Forces in Japan, said following the crash that a "96-hour operational pause" would be applied to all CH-53E helicopters, Onodera had demanded the choppers be grounded for an "indefinite period" of time until their safety could be ensured.

On Tuesday evening, however, the U.S. Marines announced that flight operations for the CH-53Es would be resumed, with a press release stating that Nicholson is "satisfied that the CH-53E aircraft is prepared to return to safe flight operations" and the decision "was not taken lightly."

"Aviation experts have conducted a thorough review of the maintenance records and found no issues with the standard maintenance practices, actions, technical directives, periodic inspections and no operational matters to warrant concern," the statement said.

The latest aviation incident involved a CH-53E transport helicopter catching fire in midair during a training drill on Oct. 11 and bursting into flames as it made an emergency landing near the Northern Training Area, which is located just 300 meters away from a residential area.

The U.S. Naval Safety Center rated the accident as the most serious "Class A." It said that a fire broke out in the helicopter's engine, which forced it to make crash-landing.

The base is central to a relocation spat between the local and central government.

Okinawan officials and residents want to see the base relocated outside the prefecture, whereas the central government maintains that relocating it to a pristine coastal region within Okinawa remains the only solution.

Accidents involving helicopters have been frequent in Okinawa, where local citizens have also had to contend, more recently, with accidents involving the controversial tilt-rotor Osprey aircraft, which can take off and land like a helicopter but fly like a fixed-wing plane.

Okinawa hosts the majority of U.S. military facilities in Japan, yet the tiny sub-tropical island accounts for just a tiny percentage of Japan's total land mass.

Officials and Okinawans have long-suffered from incidents of U.S. military accidents and crimes committed by military or affiliated personnel and are ardently calling for their base-hosting burdens to be lifted. 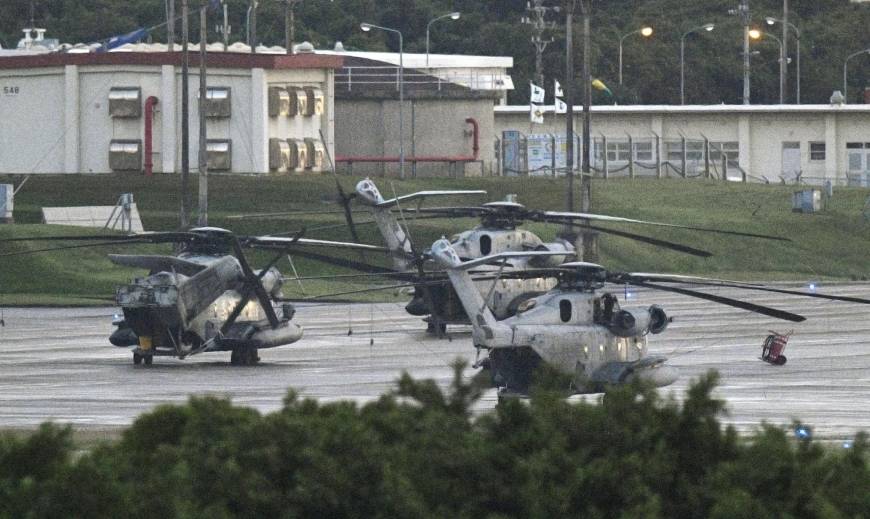