MADRID, Feb. 10 (Xinhua) -- Tens of thousands of people took to the streets in central Madrid on Sunday in a march to demand the resignation of Spanish Prime Minister, Perdo Sanchez and new general elections.

The Spanish government delegate in Madrid calculated that 45,000 people participated in the demonstration, while the organizers - Spain's right wing parties of The People's Party (PP) and Ciudadanos - gave the figure of 200,000.

The demonstration was called by PP leader Pablo Casado on Wednesday, just 24 hours after the appearance of new allegations of corruption against his party.

It was not only supported by the PP and Cuidadanos, but also by the far right wing party Vox, which won almost 11 percent of the vote in the recent elections for the Andalusian regional assembly on an anti-immigration and anti-feminism program.

Other extreme right wing organizations such as the 'Falange', 'Hogar Social', 'Spain 2000' and 'JONS' also participated in the event. Demonstrators chanted "Sanchez, traitor", "Spain united will never be defeated" and "Puigdemont to jail" (in reference to exiled former Catalan leader Carles Puigdemont), as well as "Long Live the Constitution" and "Long Live Spain!"

Mario Vargas Llosa, the Peruvian winner of Nobel Prize for Literature in 2010, was also present with former French Prime Minister Manuel Valls, who is now a candidate for Mayor of Barcelona.

Valls refused, however, to appear in the photograph that PP leader Casado posed for along with other party leaders including Albert Rivera from Ciudadanos and Santi Abascal from Vox.

Demonstrators were read a manifesto criticizing Sanchez for his government's efforts to negotiate an accord with Catalan separatists. "National unity is not up for negotiation" and Spaniards are "not willing to accept any more betrayals or concessions," it stated.

Speaking after the demonstration, Sanchez said his government's policy was trying to "resolve a crisis which was made much worse when the PP was in power."

"Where is the right wing?" asked Sanchez. "When they are in government they ask for 'loyalty' but when they are in opposition they try to provoke tension... They call that patriotism," he said. 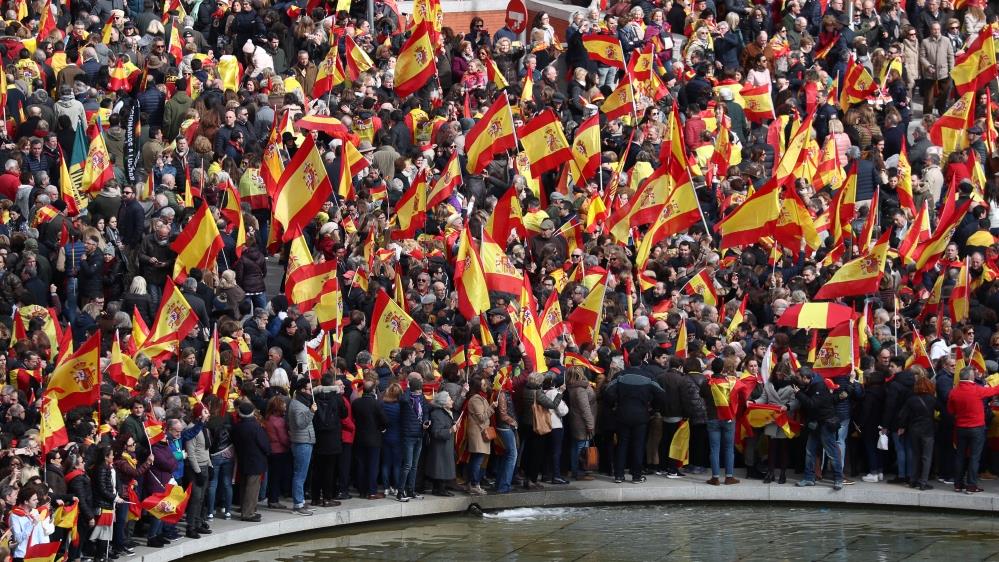