LOS ANGELES, March 6 (Xinhua) -- The thermal probe of NASA's InSight lander has hit snag and paused digging, according to the mission team on Tuesday.

The heat probe, known as the Heat Flow and Physical Properties Probe (HP3), is designed to dig up to five meters below the Martian surface and measure the heat coming from inside the Red Planet. It was set onto the planet's dusty surface on Feb. 12.

After beginning to hammer itself into the soil on Feb. 28, the 16-inch-long (40-centimeter-long) probe reached about three-fourths of the way out of its housing structure before stopping, according to NASA.

No significant progress was seen after a second bout of hammering on March 2. Data suggests the probe, also known as a "mole," is at a 15-degree tilt, said NASA.

Scientists suspected it hit a rock or some gravel.

"The team has decided to pause the hammering for now to allow the situation to be analyzed more closely and jointly come up with strategies for overcoming the obstacle," said HP3 Principal Investigator Tilman Spohn of the German Aerospace Center, which provided NASA with the instrument.

The team will hold off from further hammering for about two weeks, he added.

The good news is the probe's heat measuring functions appear to be working normally.

InSight landed safely on Mars on Nov. 26 last year, kicking off a two-year mission to explore the deep interior of the Red Planet.

The heat flow probe is one of the three instrument InSight brought to Mars. The other two are, the Seismic Experiment for Interior Structure (SEIS) for recording the "Marsquakes", and the Rotation and Interior Structure Experiment (RISE) for collecting preliminary data on the planet's core. 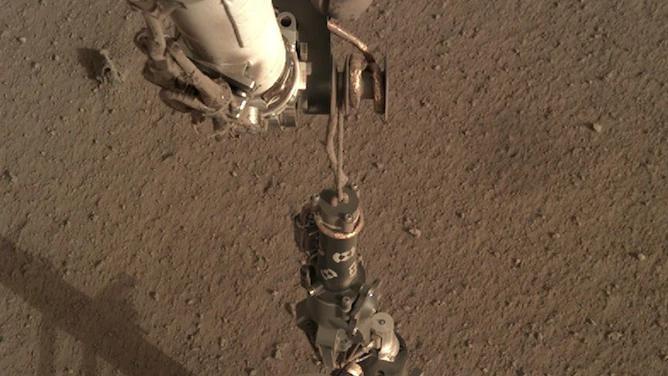