WELLINGTON, March 15 (CGTN) -- A deadly shooting at two mosques in the New Zealand city of Christchurch on Friday has left at least 40 people dead after at least one gunman opened fire during Friday prayers, New Zealand's Prime Minister Jacinda Ardern said on Friday.

So far, at least 48 others with gunshot wounds have been hospitalized, Ardern said.

Four people have been taken into custody, including three men and one woman, Police Commissioner Mike Bush told a press conference. Bush said officers were not sure if there were other suspects.

Australian Prime Minister Scott Morrison said one of four people detained is an Australian-born citizen and Australia will be involved in the investigation.

The level of terror threat in New Zealand has been lifted from low to high following the incident.

The lockdown of schools through Christchurch was lifted after more than three hours, but the police said they cannot presume there's no longer danger.

"We have asked all mosques nationally to shut their doors, and advise that people refrain from visiting these premises until further notice," police said on Twitter.

Ardern also urged Christchurch residents to remain on lockdown during a news conference following the shooting, describing the attack as an extraordinary and unprecedented act of violence and one of the country's darkest days.

According to witnesses, a man dressed in a military-style camouflage outfit came into the Al Noor mosque with an automatic rifle and started randomly shooting people.

About 300 people were reportedly inside the mosque when the attack took place.

A Palestinian man in the mosque, who did not want to give his name, said he saw a man shot in the head. "I heard three quick shots then after about 10 seconds it started again it must have been an automatic no one could pull a trigger that quick," he told AFP. "Then people started running out. Some were covered in blood."

The shooter appeared to have live-streamed on Facebook of the shooting in the Al Noor mosque. A copy of a Facebook Live video that shows a clean-shaven, Caucasian man with short hair driving to a mosque, then shooting as he enters the building. The gunman continues to shoot at people inside the mosque, some of whom were trying to flee while others were huddled in corners of the building.

Linwood mosque was the other mosque that was targeted. 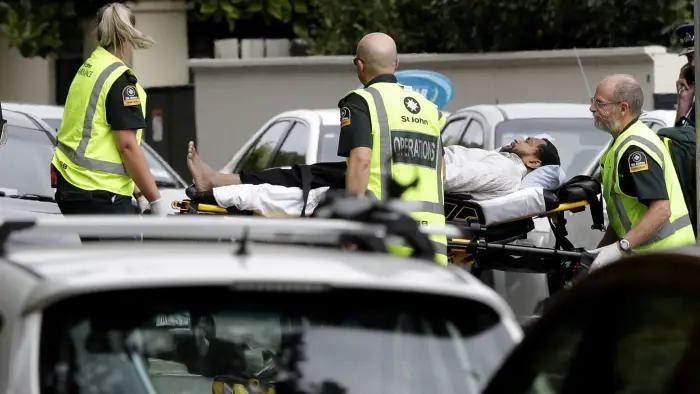