"After 52 years it is time for the United States to fully recognize Israel's Sovereignty over the Golan Heights," Trump said in a tweet.

Trump called the Golan Heights "of critical strategic and security importance to the State of Israel and Regional Stability!"

The disputed area was captured by Israel in the 1967 Middle East war and annexed in 1981 in a move not recognized internationally.

About 20,000 Israeli settlers live in the Golan Heights, which overlooks Syrian territory.

Trump's abrupt announcement was immediately cheered by Netanyahu, who faces a tough reelection battle and visits Washington next week.

"At a time when Iran seeks to use Syria as a platform to destroy Israel, President Trump boldly recognizes Israeli sovereignty over the Golan Heights," the prime minister wrote on Twitter. "Thank you President Trump!"

There was also quick approval from the senior Republican in the U.S. Senate, Lindsey Graham, who is pushing for Congress to recognize Israeli control over the Golan Heights.

The drastic policy change has met criticism from residents in the Golan Heights. In a phone interview with Reuters, Ayman Abu Jabal, a member of the Druze community in the Israeli-occupied Golan Heights said, "Neither America nor Israel, neither Trump nor Netanyahu, will change the historical fact that the Golan lands are Syrian lands and they will remain Syrian lands."

The announcement has been criticized within the U.S. as well.

Leon Panetta, a veteran Democrat who served as CIA director and defense secretary, among other roles, also blasted Trump for "tweeting out another policy that obviously has not been worked out with our international partners."

Richard Haass, a former senior State Department official who is president of the Council on Foreign Relations, wrote on Twitter that he strongly disagreed with Trump's Golan decision.

Haass said the move violates UN Security Council Resolution 242, "which rules out acquiring territory by war and serves Israel as it says all states have right 2 live in peace."

The resolution, passed after the 1967 war, called for the withdrawal of Israeli forces from occupied territories and guaranteed the right of countries in the region to live peacefully within secure and recognized borders.

"It's clear that this cynical move by Trump is not about the long-term interests of the U.S. or Israel, but rather about handing yet another political gift to Prime Minister Netanyahu in the hopes of boosting his chances for re-election next month," said J Street President Jeremy Ben-Ami.

Trump's announcement coincided with a visit by Secretary of State Mike Pompeo to Jerusalem, where he became the first high-ranking American official to visit the Western Wall alongside an Israeli prime minister – another boost for Netanyahu.

There was no clarity from the White House on when formal paperwork would be issued confirming Trump's tweeted decision. 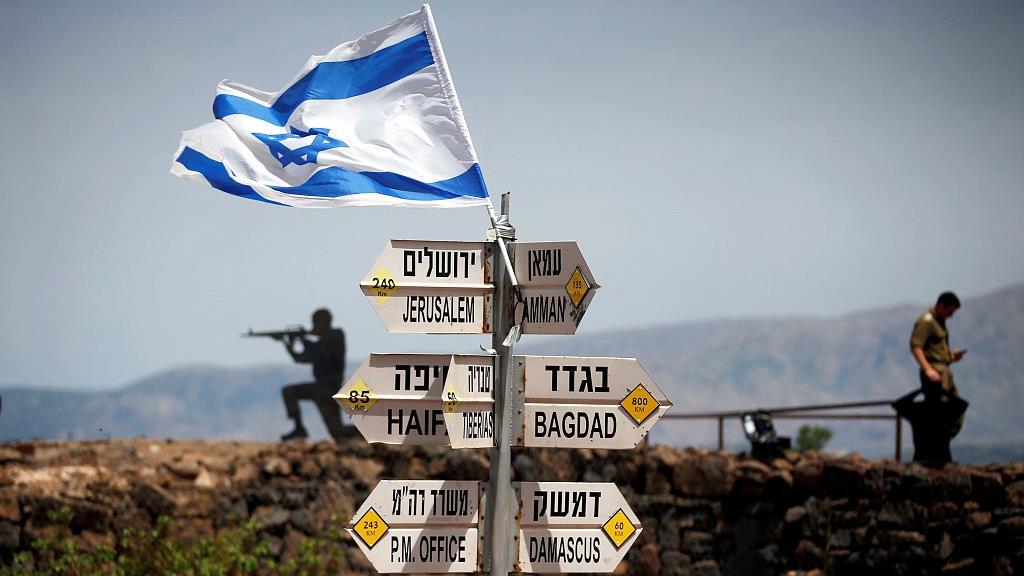