MEXICO CITY, June 17 (Xinhua) -- The Popocatepetl volcano outside Mexico's capital has spewed ash columns up to eight km high during a series of discharges on Monday, the National Coordination of Civil Protection (CNPC) reported.

The first explosion occurred at 6:44 a.m. local time (1144 GMT) and sent a column of ash between four and five km into the air, which caused ash to fall in five localities surrounding the volcano in the central states of Mexico, Morelos and Puebla.

The fourth explosion was recorded at 3:14 p.m. (2014 GMT), and it was expected that in the following hours ash would fall in localities southwest of the volcano.

The columns of grayish smoke were captured by cameras of the National Center for Disaster Prevention, which monitors the activity of the volcano.

A mild yellow phase 2 warning remained unchanged after the explosions, said the CNPC, which urged the population not to approach the volcano.

Located about 60 km from Mexico City, Popocatepetl has been active since 1994, and is currently considered one of the most active volcanoes in the world, according to Mexican authorities.

Last March, the CNPC raised the warning level issued to yellow phase 3 after several loud explosions with magma fragments occurred. However, in May the CNPC lowered it to the previous phase, the same level as in recent years. 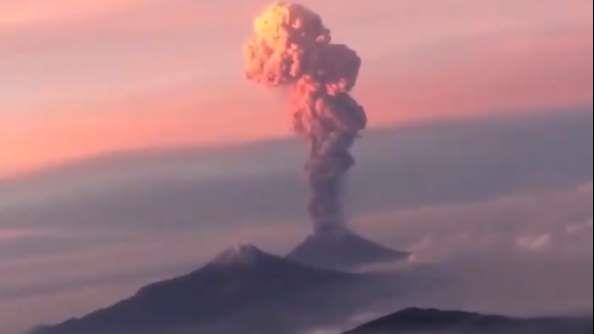