Trump Says "Most Likely" to Nominate Esper for Defense Chief

"Most likely. That's what I'm thinking about doing. And pretty soon," Trump told reporters outside the White House before leaving for Orlando, Florida, to kick off his 2020 re-election campaign, when asked if he would consider nominating Esper, the Army secretary, to be defense chief.

"I think, frankly, this could happen very quickly for Mark Esper," the president said. "He's very experienced. He's been around all of the things that we're talking about for a very long period of time."

Trump tweeted on Tuesday afternoon that Shanahan, 56, had withdrawn from consideration to be defense secretary, a post which requires Senate confirmation and has remained vacant since James Mattis resigned late last year over policy disagreements with the White House.

A former Boeing executive Shanahan who served as Deputy Secretary of Defense from 2017 to 2019, has been leading the Pentagon since the start of this year and was nominated by Trump in May to succeed Mattis.

News reports emerged on Tuesday about allegations of violence surrounding Shanahan and his family.

In a statement, Shanahan said that "a painful and deeply personal family situation from long ago is being dredged up and painted in an incomplete and therefore misleading way" in the course of his confirmation process.

"I believe my continuing in the confirmation process would force my three children to relive a traumatic chapter in our family's life and reopen wounds we have worked years to heal," Shanahan said. "I would welcome the opportunity to be Secretary of Defense, but not at the expense of being a good father."

He added that he also will step down as Deputy Defense Secretary and coordinate a transition plan.

His duties include the recruitment, organization, training, equipping, and care of 1.4 million active duty, National Guard, Reserve Soldiers, Department of the Army Civilians and their families.

Before becoming secretary, Esper, with a history of military service, once served as vice president for government relations at the Raytheon Company, a major defense contractor. 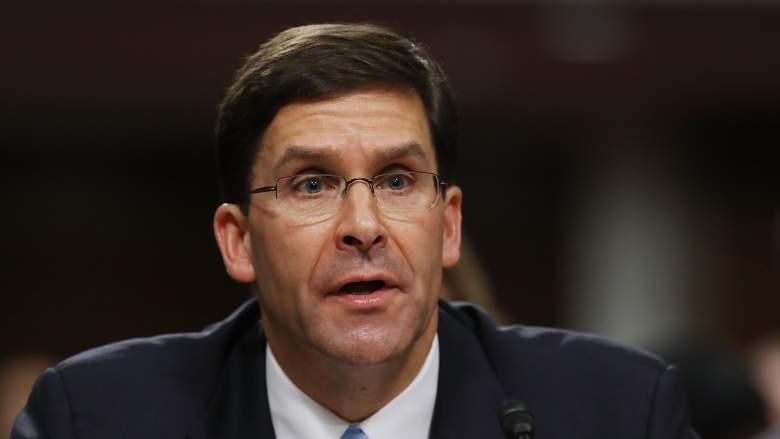