ISLAMABAD, July 12 (Xinhua) -- The death toll of the collision between a passenger train and a freight train in Pakistan's eastern district of Rahim Yar Khan on Thursday morning has risen to 21, police said late Thursday.

Umar Farooq Salamat, district police officer of Rahim Yar Khan, told the media that the death increased to 21 when rescuers recovered eight more bodies after cutting the destroyed coaches of the passenger train.

The officer said that 100 others were also injured in the collision, adding that a majority of the wounded suffered severe injuries.

The initial probe revealed that the accident happened when the signal went wrong on the track, leading the passenger train to go on to the loop line where the freight train was parked, said the official.

The passenger train Akbar Express was heading to southwest Quetta city from eastern Lahore when it faced the accident near the Walhar railway station in the district.

Following the accident, police and rescue teams rushed to the site and shifted the injured to nearby hospitals. The hospital officials feared that the death toll might further rise as some of the injured are in critical condition.

The engine and three carriages of the passenger train were completely destroyed in the collision. Train service was resumed after being closed for over 10 hours following the accident.

Federal Railways Minister Sheikh Rasheed Ahmad said that the accident occurred due to human errors, adding that he has ordered an investigation into the accident.

Pakistani President Arif Alvi and Prime Minister Imran Khan expressed deep grief and sorrow over the loss of precious lives in the accident.

The prime minister asked the railways minister to take emergency steps to counter decades of neglect of railways infrastructure and ensure safety standards. 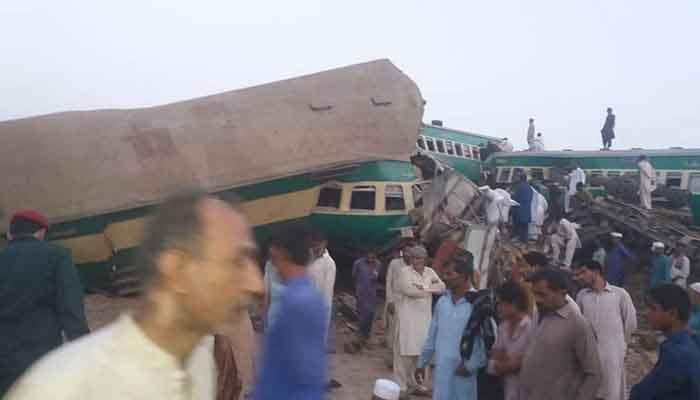