NEW DELHI, Aug. 11 (Xinhua) -- Around 115 people have died over the past three days in a fresh spate of floods in India, this time in several states located along the western coast, including Kerala, Karnataka, Maharashtra, and Gujarat, said media reports on Sunday.

The exact death toll is not known yet as different official agencies are carrying out relief and rescue operations.

The worst-affected is the southern state of Kerala from where a maximum of 57 deaths have been reported over the past three days. Karnataka has reported as many as 26 deaths, while around 20 persons lost their lives in Gujarat. The south-western state of Maharashtra has reported around 12 deaths so far.

Over half-a-million people have been evacuated from the inundated areas in all these states, and rehabilitated in relief camps set up by respective state governments.

Earlier, over 200 human deaths were reported from the eastern state of Bihar and northeastern state of Assam, which were battered by flash floods for two weeks beginning July 15.

On Saturday, one of the four shutters of the Banasurasagar dam in Wayanad was opened to discharge the excess water and people on the banks of the Kabini river have been asked to be cautious. Banasurasagar is known to be one of the largest earth dams in India.

Due to inundation of railway tracks, as many as 23 trains were cancelled fully and five partially. The Kochi international airport which was shut down for three days, is expected to become partially operational on Sunday.

According to media reports, around 125,000 people have been shifted to around 1,100 relief camps.

The flood situation is said to have worsened in Karnataka too where the death toll rose to 26 in rain-related incidents. State's Chief Minister B.S. Yediyurappa, who has conducted several aerial surveys of the flood-affected areas, has termed the natural calamity the "biggest" in 45 years.

In Maharashtra, over 400,000 people have been moved to safety from the flood-hit areas so far, including 378,000 from the worst-hit Kolhapur and Sangli districts. State's Chief Minister Devendra Fadnavis reviewed the rescue and relief operations in Sangli. He said that this year's floods were the worst in the past 15 years.

In western state of Gujarat, around 20 persons have been killed in rain-related incidents so far. Chief Minister Vijay Rupani was quoted as saying - "Seventeen dams are overflowing. Last year, by the end of monsoon, dams had only 56 percent water. This year there is 60 percent water stock in dams already." 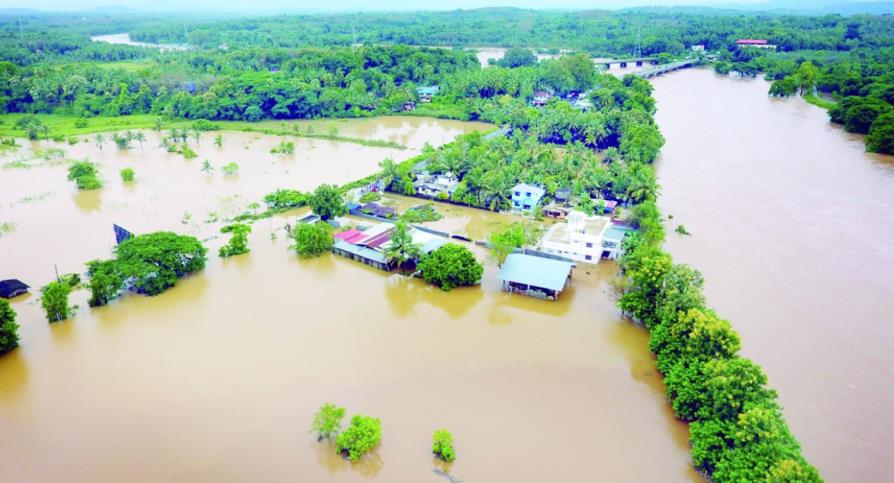