UNITED NATIONS, Aug. 22 (Xinhua) -- A Chinese envoy said Thursday that it is unacceptable to use China as an excuse for the United States to leave the Intermediate-Range Nuclear Forces (INF) Treaty, which ended on Aug. 2 after the United States formally withdrew from it.

"It is unacceptable to use China as an excuse for leaving the treaty, and China rejects the baseless accusation by the United States," Zhang Jun, China's permanent representative to the United Nations, told the Security Council emergency session under the agenda item "threats to international peace and security."

"China unswervingly pursues a national defense policy that is defensive in nature," he said. "China's nuclear strategy for self-defense is completely transparent and its nuclear policy is highly responsible."

"China's nuclear arsenal is extremely limited in scale, and poses no threat to international peace and security," he noted.

For decades, China has actively participated in arms control consultations and negotiations "under multilateral mechanisms and frameworks" including those of the United Nations and Conference on Disarmament, said the ambassador.

"Moving forward, China will continue to firmly uphold multilateralism, and actively participate in multilateral arms control processes to contribute to the maintenance of international peace and security," he said.

In response to the U.S. criticism of China's development of intermediate range missiles, Zhang stressed that the U.S. withdrawal from the INF Treaty is yet "another act of unilateralism and escape from international obligations by the United States."

"It is aimed at relieving restrictions and seeking absolute military advantage," the envoy noted.

"China pursues a national defense policy that is defensive in nature. China's land-based intermediate range missiles are all deployed within the Chinese territory," Zhang said. "It is for defense purposes and poses no threat to any country."

"China firmly opposes U.S. deployment of intermediate range missiles in the Asia-Pacific and looks to the United States to be cool-headed and exercise restraint," said the envoy.

The unilateral withdrawal of the United States "led to the demise" of the treaty, which will have a far-reaching negative impact on global strategic balance and stability, regional security in Europe and Asia, as well as international arms control regime, the ambassador said, urging the international community to be clearheaded about this impact.

"China strongly urges the relevant country to take a highly responsible attitude, exercise restraint and earnestly preserve the existing arms control regime in an effort to safeguard global strategic balance and stability, and international and regional peace and security," the envoy said. "This is the shared message from the international community."

"Multilateralism is the effective means to address common challenges," Zhang said. "All countries should resolutely safeguard the international order with international law and the purposes and principles of the UN Charter at its core, embrace a concept of common, comprehensive, cooperative and sustainable security, fully respect the legitimate security concerns of all countries, work hard for a peaceful and stable international security environment and promote a community of a shared future for mankind."

Referring to the U.S. claim that China should join the United States and Russia in the arms control negotiation, Zhang stressed that for any such negotiation, it is imperative to fully consider the relevant countries' overall military capabilities and follow the principle of "undiminished security for all," a basic principle of international arms control.

"China has repeatedly stated its position on the so-called arms control negotiation with the United States and Russia. China has no interest and will not be part of it," the ambassador stressed.

The U.S. Department of Defense confirmed on Monday that it had conducted a flight test of a ground-launched cruise missile which hit its intended target after traveling more than 500 km.

It marked the first time the United States conducted an intermediate-range cruise missile test after it withdrew from the INF Treaty three weeks ago.

The United States and former Soviet Union signed the INF Treaty in 1987 and ratified it the following year. The treaty prohibited possessing, development and testing of ground-launched missiles with a range of 500 to 5,500 kilometers. 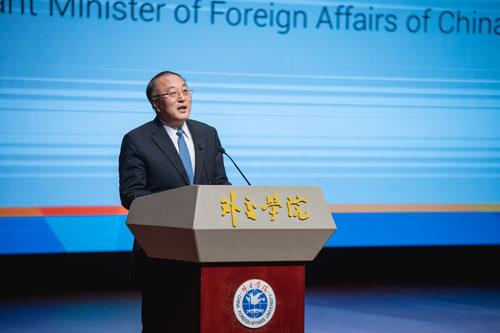