UNITED NATIONS, Oct. 11 (Xinhua) -- A Chinese envoy warned on Friday that international arms control and disarmament has come to a crucial crossroads with a series of significant challenges.

Speaking at a plenary meeting of the First Committee of the UN General Assembly, Fu Cong, head of the Department of Arms Control of the Chinese Foreign Ministry, said the world is encountering changes unseen in a century and the international security situation has become increasingly complicated and unsettling.

The United States, in its desperate attempt to gain security supremacy over others, continuously lowers the threshold for the use of nuclear weapons, and turns outer space and cyberspace into new battlegrounds, said Fu. "Such acts have severely undermined global strategic stability and increased the risk of a nuclear war."

"Withdrawalism" of the United States is running rampant, he said. As the United States scrapped the Intermediate-Range Nuclear Forces (INF) Treaty, and the future of New START, the nuclear arms reduction treaty between the United States and Russia, remains uncertain, the international security situation is plagued with unprecedented uncertainties, he said.

Breach of commitments and abuse of maximum pressure by the United States are constantly escalating the Iran nuclear issue, and pushing the security situation in the Middle East to a breaking point, he said.

The dual effects of technological development are increasingly prominent. The military application of new and advanced technologies is having a profound impact on global security, giving rise to ethical and legal concerns, he said.

Given the current circumstances, all states should be firmly committed to maintaining the authority and effectiveness of the Nuclear Non-Proliferation Treaty (NPT), upholding the three pillars of the treaty -- nuclear disarmament, nuclear non-proliferation and peaceful use of nuclear energy -- in a balanced manner, and working for positive outcomes at the NPT Review Conference next year, he said.

At the same time, all states should strengthen the implementation mechanism of the Chemical Weapons Convention, mitigate the tendency of politicization in the Organization for the Prohibition of Chemical Weapons, said Fu.

It is the common aspiration of the international community to realize the complete prohibition and thorough destruction of nuclear weapons, he said. To achieve this goal, all states should adhere to the principles of "maintaining strategic balance and stability" and "undiminished security for all," and incrementally promote international nuclear disarmament.

"China deeply regrets the U.S. withdrawal from the INF Treaty. China firmly opposes U.S. attempts to deploy intermediate-range missiles in the Asia-Pacific region," said Fu. "The real purpose of the above U.S. moves is to seek unilateral military and strategic advantages, which will harm the international nuclear disarmament process and threaten regional peace and security."

Fu stressed the need to resolve proliferation issues through political and diplomatic means. "Given the complexities of the proliferation-related issues, they can only be properly resolved through dialogue and cooperation," he said.

Attempts to impose one's demands on others while ignoring others' legitimate concerns by means of unilateralism and maximum pressure will only make issues more complicated and intractable, which serves no state's interests, he said.

The Iran nuclear deal is a multilateral agreement endorsed by the UN Security Council and the only viable solution to the Iran nuclear issue. States should respect the international order, uphold the deal and make sure that this historic diplomatic outcome is not derailed, he said.

He asked for efforts to effectively advance governance in strategic new frontiers for the purpose of peaceful development.

China has always been firmly opposed to the weaponization and arms race in outer space. It is deeply concerned about the attempts by the United States to dominate outer space, he said.

He called on the Conference on Disarmament to negotiate and conclude a legally binding international instrument with regard to outer space at an early date.

China resolutely opposes the U.S. practice of using "national security" as a pretext for obstructing the development and cooperation of information and communications technologies, said Fu.

China will continue to follow the path of peaceful development, strive for the sound development of the international arms control process, play a responsible role in global security governance, and make new contributions to maintaining international and regional peace and security and building a community with a shared future for mankind, he said. 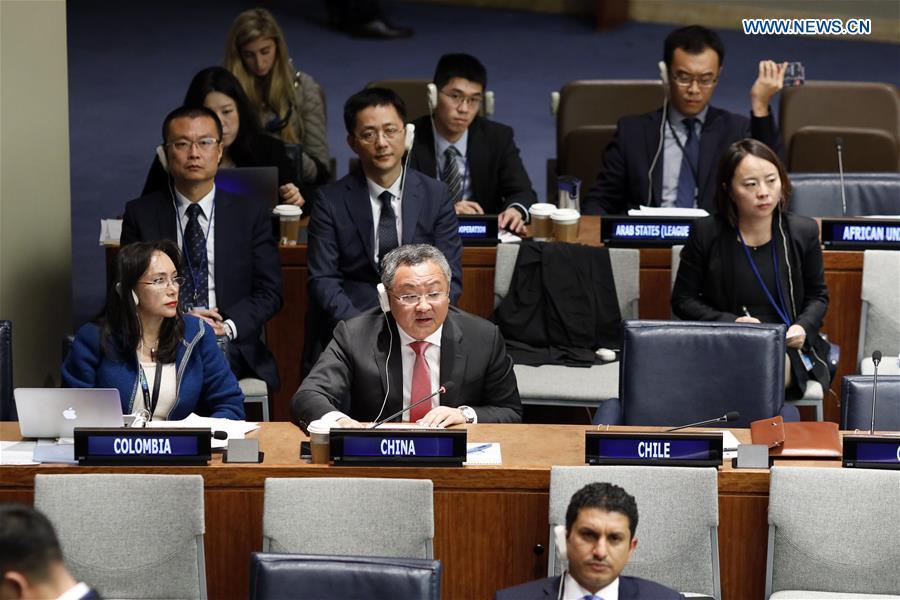