WASHINGTON, Oct. 13 (CGTN) -- U.S. President Donald Trump said Friday that the United States and China are close to ending trade disputes and will eventually reach an agreement that will benefit all.

With Chinese Vice Premier Liu He sitting across a desk from him in the Oval Office, Trump made the remarks while answering questions from a Xinhua News Agency's reporter, that the two sides were very close to ending their trade disputes.

Trump said he is very pleased to see that the new round of trade consultations between the U.S. and China has made a substantial progress and reached a "phase one" trade deal, which is positive news for both countries.

It is hoped that the teams of both sides will work hard to finalize the agreements of the "phase one" deal as soon as possible and continue to push forward in follow-up consultations, he added.

Trump has emphasized many times that the U.S. and China will make a "great deal," which goes beyond the problem of tariffs itself.

Trump also said he totally agreed the viewpoint addressed by Liu that a good economic and trade relationship is beneficial to China, the U.S., as well as world peace and prosperity. Thus, the "world needs to pay close attention [to the U.S.-China trade consultation]."

The new round of high-level economic and trade consultations concluded on Friday in Washington and made progress in areas including agriculture, intellectual property rights protection, exchange rate, financial services, expansion of trade cooperation, technology transfer, and dispute settlement.

The two sides agreed to make joint efforts toward eventually reaching an agreement.

Regarding the Chinese negotiation team, Trump told a China Media Group reporter that "people of China should be very proud of this team, starting with the Vice Premier."

"They're tough. They're smart. And they have negotiated a great deal."

"Everybody on my team respects your team," said Trump. "So, I think they've really handled themselves incredibly well."

On the same day, the New York Times published a joint letter by the former prime ministers of Australia, New Zealand and Sweden, or Kevin Rudd, Helen Clark and Carl Bildt, warning the trade war is threatening the world's economy.

"As countries long committed to the principles of free trade, we do not see the ever-widening tariff war, started by the United States, as an effective way to resolve trade and economic disputes," the letter said.

The politicians viewed tariffs as the enemy of free trade, stressing that "their cumulative impact, particularly combined with the current resurgence of protectionism worldwide, only depresses economic growth, employment and living standards."

"Tariffs raise the cost of living for working families as consumer prices are driven up," the letter argued.

There will be purchases of about 40 billion to 50 billion U.S. dollars' worth of agricultural products by China, Trump said after the talk, stressing that it's a "tremendous deal for the [U.S.] farmers."

Also, from January to July this year, China's imports of agricultural products from the United States saw a 49.3 percent decrease year-on-year, at 6.69 billion U.S. dollars.

According to Bloomberg, U.S. Treasury Secretary Steven Mnuchin implied last Friday that he'll consider lifting a U.S. designation that China manipulates its currency once the first phase of a new U.S.-China trade deal is complete.

He also mentioned both sides had very good discussions on financial services.

Foreign enterprises will be entitled to treatment equivalent to domestic firms and further efforts will be made to protect the intellectual property of transnational corporations in core processes and components in the industry chain. 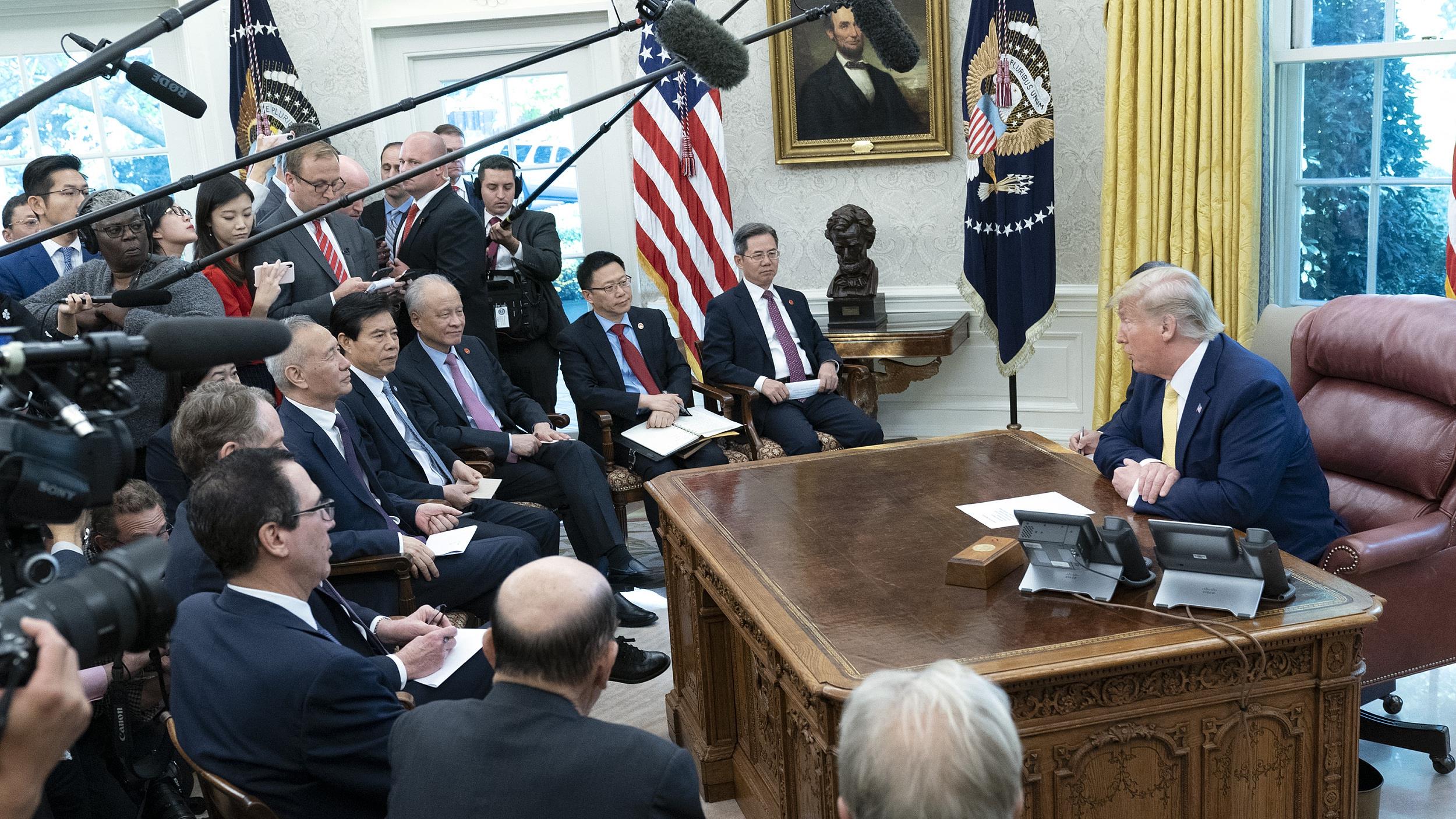