DAMASCUS, Oct. 13 (Xinhua) -- The Kurdish Autonomous Administration of North and East Syria, known as Rojava, said on Sunday that it had reached an agreement with the Syrian government to confront the current Turkish assault.

"An agreement has been reached with the Syrian government for the entry and deployment of the Syrian army along the Syrian-Turkish border to aid the Kurdish-led Syrian Democratic Forces (SDF) in facing the Turkish offensive and recapturing areas that fell to the Turkish forces," Rojava said in a statement.

The agreement will allow for liberating other Syrian areas such as Afrin which fell to the Turkey-backed rebels in 2018.

The Syrian official media outlets said that the Syrian army was moving toward the northern region to "confront the Turkish aggression."

The report revealed no further details on the nature of the "confrontation," but it came shortly after the pan-Arab al-Mayadeen TV and the Syrian Observatory for Human Rights (SOHR) reported that the Syrian army would enter two key Kurdish areas in northern Syria within 48 hours.

The SOHR said it has "confirmed information" that a deal was reached between the SDF and Russia about the entry of the Syrian army into Manbij and Ayn al-Arab, also known as Kobane.

A well-informed Kurdish source reached by Xinhua also confirmed that the Syrian army would assume control over Manbij and Ayn al-Arab, both are key Kurdish-held cities in northern Syria.

On Wednesday, Turkey started the military campaign in northern Syria in an attempt to eliminate the SDF and its umbrella, the People's Protection Units, which are both deemed by Ankara as separatists and terrorists.

The Turkish operation also aims to create a safe zone in northern Syria to resettle millions of Syrian refugees.

It came after the withdrawal of the U.S. forces from northern Syria, which was seen as a sign of abandoning the Kurdish forces that are considered as Washington's allies in fighting the Islamic State militants in Syria.

Syrian Foreign Ministry has issued two statements since the beginning of the Turkish operation, accusing Ankara of targeting residential areas and causing deaths of civilians while holding the Kurdish forces responsible for the Turkish military incursion.

The Kurdish forces had been advised to accept the entry of the Syrian forces and government institutions to the Kurdish-held areas in northern Syria to strip Ankara of its pretext to launch a military assault in the northern region.

Earlier in the day, state news agency SANA reported that the Turkish army and allied Syrian rebel groups captured several areas in the countryside of Hasakah province in northeastern Syria and the countryside of the northern Raqqa province.

The SOHR said earlier that the number of civilians who fled the battle zones in the area exceeded 100,000, warning that the situation there could be "fully catastrophic." 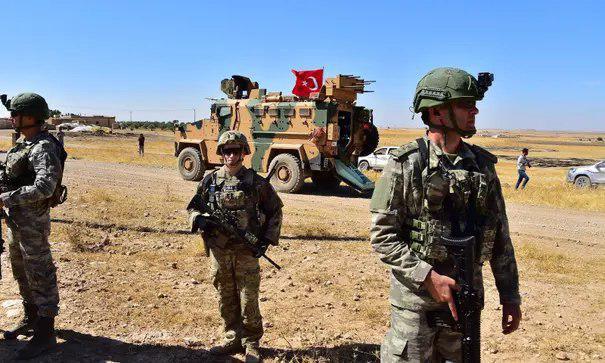