SYDNEY, Nov. 9 (Xinhua) -- Bushfires have claimed the lives of at least two people in the Australian state of New South Wales, authorities confirmed on Saturday.

A further seven people were unaccounted for with fears that the death toll could rise.

"Our thoughts and prayers of course go to the families and loved ones of those two deceased persons," State Premier Gladys Berejiklian told reporters in Sydney.

The body of one person was found in a vehicle near the town of Glen Innes on the state's far North Coast. Another woman was found by emergency crews with extensive burns to her body and later died in hospital.

"The reports were initially burns to 40 to 50 percent of her body," NSW Rural Fire Service Commissioner Shane Fitzsimmons said.

The fires, which flared up along the country's east coast on Friday afternoon, also destroyed more than 100 homes.

Three fires were still burning at an emergency level on Saturday morning, and at the height of the disaster on Friday afternoon, a record 17 fires were given that classification.

Berejiklian said that with a number of fires still burning uncontrolled across the state, the worst may be yet to come.

"We do need to brace ourselves and what is concerning is that the forecast weather conditions on Tuesday could mean that we're not through the worst of it," she said. 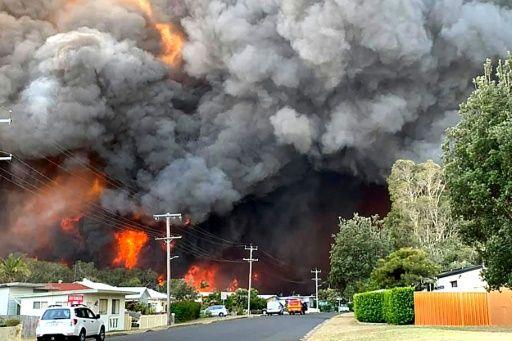