COLOMBO, Nov. 17 (Xinhua) -- Sri Lanka's President-elect Gotabaya Rajapaksa said on Sunday that he was ready to take over the presidency and begin work for all his citizens, shortly after the Elections Chief declared him the winner of Saturday's presidential polls.

"I am very happy that I have won. I am ready to take over and begin work for all my citizens," Rajapaksa told Xinhua after meeting Elections Chief Mahinda Deshapriya in the capital of Colombo.

Rajapaksa met Deshapriya on Sunday afternoon at the Elections Commission, where Deshapriya congratulated him and officially declared him the winner.

Rajapaksa contested the presidential election held on Saturday from the opposition Sri Lanka Podujana Peramuna (SLPP) after his party declared him as the most popular candidate of the SLPP.

According to final results, Rajapaksa won the polls after securing over 6.9 million votes, or 52.25 percent of the total votes, defeating his opponent, Sajith Premadasa who secured over 5.5 million votes, or 41.99 percent.

Premadasa contested from the ruling government.

Rajapaksa served as the defense secretary in the previous Sri Lankan government which was headed by his brother Mahinda Rajapaksa.

Rajapaksa will be sworn in as the president on Monday morning in Anuradhapura, in Sri Lanka's North Central province. 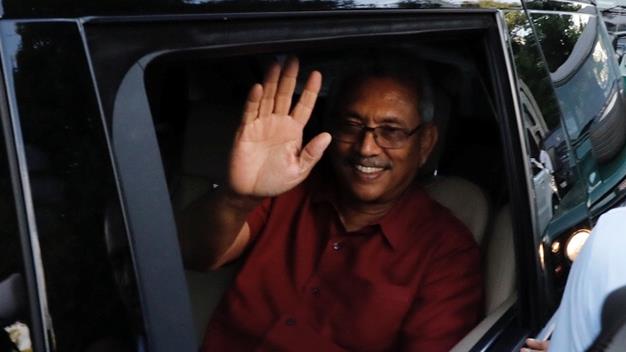