JAKARTA, Feb. 25 (CNA) - Dozens of Jakarta neighbourhoods were flooded Tuesday (Feb 25) after torrential rains pounded Indonesia's capital, less than two months after nearly 70 people were killed in some of the megacity's worst flooding in years.

There were no immediate reports of casualties after the latest deluge, but parts of the city ground to a halt as whole neighbourhoods were swamped in muddy water, while power outages hit some districts.

At least 81 neighbourhoods were inundated with a dozen toll roads closed and some commuter train lines shuttered, according to an announcement by Indonesia's Disaster Mitigation Agency.

Flooding was particularly severe in the Bekasi area west of the capital.

More torrential rains were expected later in the day.

"So the flooding will likely spread," agency spokesperson Agus Wibowo said on Twitter.

Floodwaters in some districts were as high as 127cm.

The weather agency linked the rains to tropical cyclones in Australia and in the Indian ocean that had caused bad weather across the islands of Java, Bali and Nusa Tenggara. The agency also warned of high waves in the seas south of Java.

Jakarta police, via its Instagram account, warned of road closures due to flooding and train services also suffered major disruption.

Videos and photos posted by Jakarta police showed flooded street in an industrial area in East Jakarta with lines of halted trucks and scores of motorcycles.

Indonesian state electricity utility Perusahaan Listrik Negara (PLN) said in a statement that electricity was shut off to 326 substations to ensure safety.

The low-lying city is prone to flooding during the wet season which starts around November.

Torrential rain in January triggered flooding and landslides that killed nearly 70 people in and around Jakarta while thousands more were forced to evacuate to shelters. 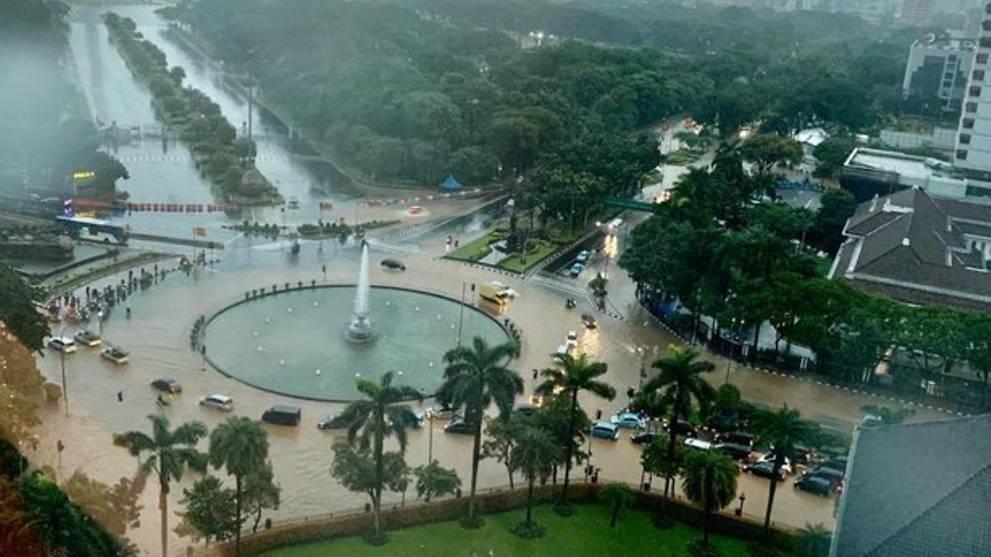