445 Filipinos aboard Coronavirus-hit Cruise Ship under Quarantine in Philippines

MANILA, Feb. 26 (Xinhua) -- A total of 445 Filipinos aboard the coronavirus-stricken cruise ship docked in Yokohama, Japan entered a 14-day quarantine at a facility north of Manila after they were flown back to the Philippines late on Tuesday night and early on Wednesday morning.

"After the release of negative laboratory results of tests conducted by the Japanese Ministry of Health, Labor and Welfare, the repatriates were allowed to disembark from the ship and transfer by bus to Haneda airport," the Philippine Department of Foreign Affairs (DFA) said in a statement.

The DFA said the first flight, which carried 309 passengers, as well as a two-member repatriation team from the DFA and a four-member health response team from the Department of Health, arrived at Clark Airbase at 10:10 p.m. on Tuesday.

The DFA added the second flight, with 136 passengers in addition to a two-member DFA team and a five-member team from the DOH, arrived at 12:12 a.m. on Wednesday.

Upon landing, the DFA said all repatriates, as well as the DFA and DOH repatriation team members, and PAL flight crew were brought to the Athletes' Village in New Clark City for another round of 14-day quarantine program.

According to the DFA, a total of 538 Filipino crew and passengers were onboard the Diamond Princess cruise ship, of which 80 tested positive for COVID-19 and have been admitted to Japanese hospitals. Of the 80 infected Filipinos, the DOH said 10 have recovered and discharged from hospitals.

None of these 80 positive cases, however, were included in the Philippine government's repatriation program for now.

The cruise ship has been quarantined at the Yokohama port in Japan since Feb. 5, after one of its passengers tested positive for COVID-19.

The group is the second batch of repatriates that the DFA brought home following the first batch of 30 repatriates from Wuhan in central China that finished their 14-day quarantine at New Clark City on Feb. 22. 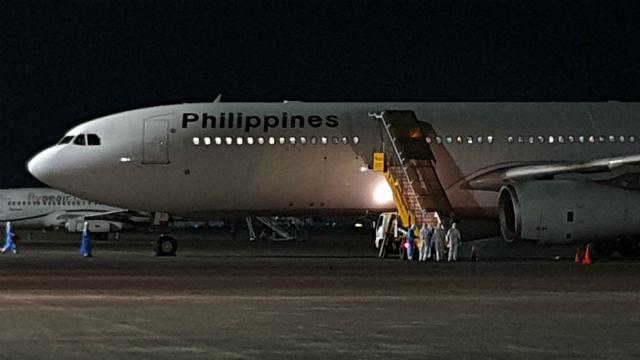