SEOUL, Feb. 28 (Yonhap) -- South Korea's confirmed cases of the new coronavirus approached 2,400 on Friday as the nation worked to aggressively counter the fast-spreading virus with extensive testing. Health authorities renewed calls for citizens to keep away from others and avoid mass gatherings such as religious services over the weekend.

The 571 new cases -- the sharpest daily spike yet, outnumbering 327 new cases reported in China earlier in the day -- brought the nation's total infections to 2,337, according to the Korea Centers for Disease Control and Prevention (KCDC). Only two days ago, the number of infections had just exceeded 1,000.

So far, 13 people have died in South Korea from the virus that emerged in China.

South Korea confirmed its first new coronavirus case from a Chinese woman from Wuhan, the epicenter of the virus outbreak, on Jan. 20.

Of the 571 new cases, 447 are in Daegu, 300 kilometers southeast of Seoul, and 64 are in the neighboring North Gyeongsang Province. The totals for Daegu and North Gyeongsang stand at 1,579 and 409, respectively.

About 42 percent of confirmed cases here, or 840 cases, had been tied to a branch of the Shincheonji religious sect in the southeastern city of Daegu. Most other cases with unknown origins are believed to be linked to the religious sect, KCDC said.

Only 1.6 percent of the total infections, or 33 cases, are tied to people who had recently traveled overseas or come in contact with them, KCDC said.

Other major provinces and cities have also reported some infections, with Seoul's total rising to 62.

In another worrisome development, the cumulative number of virus patients in Busan -- South Korea's second-largest city with 3.5 million people -- rose to 65, with 32 patients linked to a Christian church in the Dongnae district.

The 32 patients of the Oncheon church in Busan are tied to the church's three-day retreat that ended on Feb. 17, officials said. It is still unclear how they were infected with the virus.

Since raising the virus alert level to "red," the highest level, on Sunday, health authorities have focused on halting the spread of the virus in Daegu, the epicenter of the virus outbreak here, and North Gyeongsang Province.

Experts said the number of confirmed cases is expected to jump in the coming days as health authorities have begun testing more than 210,000 members of the Shincheonji Church of Jesus at the center of the rapid spread in other provinces.

Vice Health Minister Kim Gang-lip said in a daily briefing that tests on 1,299 Shincheonji members who have shown symptoms of the virus in Daegu have been completed.

Official results of the tests will be released over the weekend, and the number of confirmed cases is expected to be "very high," Kim said.

The government also ordered another 1,638 Shincheonji followers to self-isolate as they have shown symptoms, Kim said.

"The most important thing to prevent COVID-19 from spreading nationwide is that people must stay indoors for the time being and minimize human-to-human contacts," Kim said. "In particular, people need to refrain from attending religious gatherings or rallies over the weekend."

Kim Nam-joong, a pulmonologist at Seoul National University Medical School, said, "The number of COVID-19 confirmed cases is expected to increase for the time being."

"Given the huge volume of testing, the number of patients is expected to decline from a peak after a certain period of time goes by," the pulmonologist said.

Since the first outbreak on Jan. 20 in South Korea, the pace of infections had not been alarming until Feb. 18, when a 61-year-old woman who is tied to the Daegu religious sect tested positive for the virus.

Since then, the nation has seen an explosion in infections as it accelerated virus tests on potential cases.

Across the nation, local governments and hospitals have launched an easier and faster testing method -- "drive-thru" test centers that allow a driver with symptoms to get a test inside his or her car. The whole test procedure takes about 10 minutes, and such facilities are also aimed at helping protect health workers.

With virus fears mounting, K-pop superstar band BTS canceled its four local concerts in April. Hyundai Motor said one of its domestic plants suspended operations after an employee of the plant was diagnosed with the virus.

The number of people being checked for the virus and under quarantine came to 30,237, it added. The country has tested a total of 78,830 suspected cases, with 48,593 testing negative. 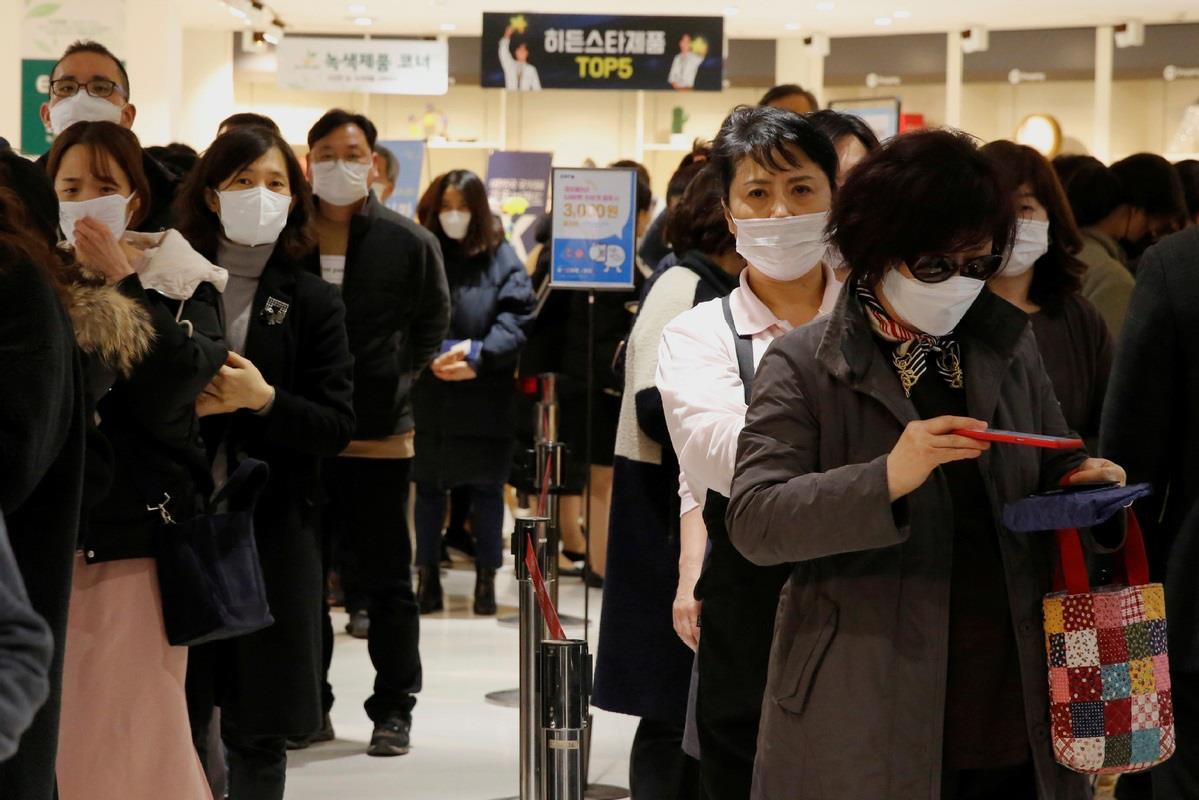