The seven newly reported cases worked in the same restaurant in Bergamo, Italy, as the first overseas imported case in Qingtian county. They tested positive for nucleic acid on Monday.

Six of them shared flight SU2415H from Milan to Moscow and transferred in Moscow on February 27 to Shanghai Pudong International Airport. When they reached Qingtian county on February 28 they were immediately put under quarantine.

One of them took flight LH0273 from Italy and transited from Germany on February 29 to Shanghai. The patient was also put into quarantine after arriving in Qingtian on February 29.

Qingtian county is a well-known "hometown of overseas Chinese" with a population of 330,000, of whom about 100,000 live in Italy, media reports said.

The reported case on Monday was an overseas Chinese woman who flew back from Milan, Italy, to Qingtian county on February 28. The patient, surnamed Wang, had been taking medicine since showing symptoms of fever, coughing and diarrhea on February 16. The 31-year-old tested positive for nucleic acid on Sunday and is now being quarantined at Qingtian People's Hospital for medical treatment.

The Qingtian county government issued a letter to overseas Chinese on Sunday, saying it understood why some of them thought of returning to China due to the worsening epidemic abroad, but added that experience has shown that staying at home is the best protective measure, urging them to postpone plans to return to China without a special reason.

"Returning to China not only brings the risk of infection on the way, it will also bring tremendous pressure and challenges to the prevention and control of the epidemic in your hometown, and it will also endanger the health and safety of the family and the people of the county," the letter said.

No other domestic confirmed cases were reported in Zhejiang Province, according to the local health commission on Tuesday.

Zhejiang is another region in China that has seen a case from abroad after Beijing, Guangdong and Ningxia Hui Autonomous Region.

South China's Shenzhen in Guangdong Province reported its first imported case of coronavirus infection from London. Beijing reported two imported cases of COVID-19, Chinese nationals who had flown in from Iran. They had been in close contact with the first confirmed COVID-19 patient who came back from Iran to Northwest China's Ningxia Hui Autonomous Region. 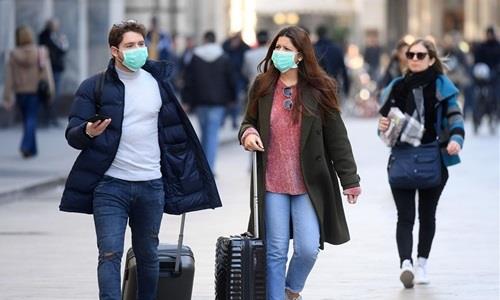