A code-red aviation alert - the highest - was sent out to inform pilots that an eruption was under way with significant emission of ash into the atmosphere, said the Centre for Geological Disaster Technology Research and Development (BPPTKG) in a press release.

Ashfall was reported within a 10km radius of the peak after the eruption at 5.22am; the eruption lasted for nearly eight minutes.

"There was a thundering noise for at least five minutes and I could see the ash clouds from my house," Jarmaji, a resident of Boyolali regency, said.

Authorities did not raise the rumbling volcano's alert status, but they temporarily shuttered the international airport in Solo city - also known as Surakarta - about 40km away.

No casualties were reported, and local village leaders told Antara news agency that residents were going about their daily activities despite the eruption.

"Residents are monitoring the situation, although they are going about their daily activities as per normal," said Klakah village head Marwoto, adding that students were going to school and that farmers were out working the fields.

Mount Merapi last erupted on Feb 13 this year and has been on the Watch alert, the third highest in a four-level volcanic monitoring system, since May 21, 2018.

"As with previous instances, today's eruption was not preceded by clear precursors," said the geological centre BPPTKG, adding that no significant land deformation was detected.

"This observational data shows the lack of sufficiently strong pressure before the eruption, suggesting that the erupted materials were dominated by volcanic gas."

It added that such an eruption may continue to occur as outflow from the magma chamber persists.

The agency warned residents to stay out of a 3km no-go zone around Mount Merapi, citing possible danger from flowing lava and pyroclastic flows - a fast-moving mixture of hot gas and volcanic material.

The last major eruption in 2010 killed more than 300 people and forced the evacuation of some 280,000 residents.

That was Merapi's most powerful eruption since 1930, which killed around 1,300 people, while another explosion in 1994 took about 60 lives.

The Southeast Asian nation - an archipelago of more than 17,000 islands and islets - has nearly 130 active volcanoes.

It sits on the Pacific Ring of Fire, a vast zone of geological instability where the collision of tectonic plates causes frequent quakes and major volcanic activity. 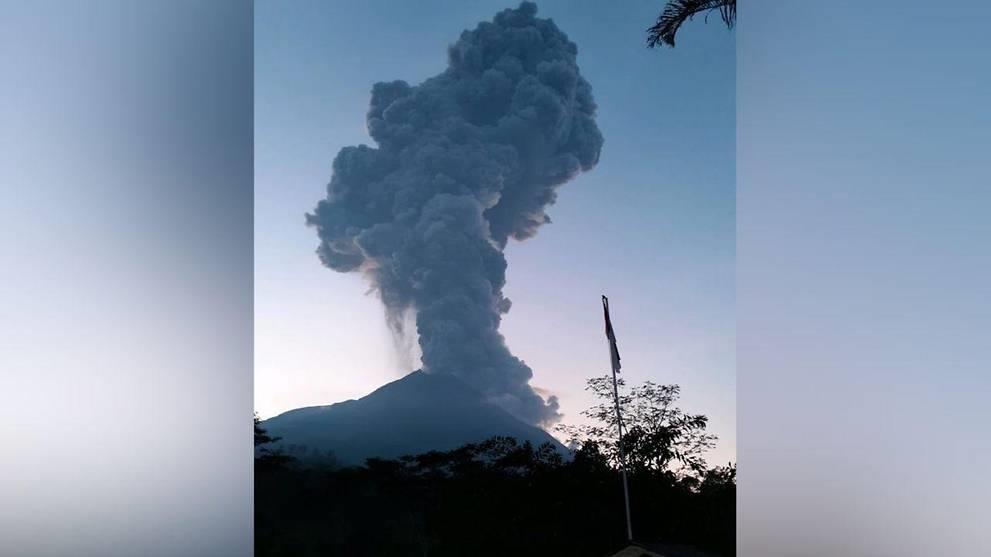