BEIJING, March 3 (Xinhua) -- The largest unnamed planet in the solar system has recently been named after the Chinese water god Gonggong by the International Astronomical Union (IAU).

This is the first and only dwarf planet in the solar system that has a Chinese name, according to the National Astronomical Observatories under the Chinese Academy of Sciences Tuesday.

Gou Lijun, a researcher at the observatory, said the naming is an important event that will help Chinese astronomy gain global attention, as most dwarf planets are named after Greek and Roman mythical figures.

"It will not only help promote a more international understanding of Chinese culture, including ancient myths, but also attract more Chinese astronomers and stargazers to pay attention to the 'Gonggong' planet," said Gou.

The planet, coded 2007OR10, was discovered in 2007 by three astronomers on the far edge of the solar system, outside Neptune's orbit. It is one of the reddest celestial bodies found in the Kuiper Belt in the solar system, and it rotates around the sun in an elliptical orbit.

The official naming was produced through an online vote in 2019 launched by one of its discoverers. The three candidates were the Chinese water god Gonggong, the Germanic Winter Goddess Holle and the God Vili from Norse mythology. They are all mythological characters related to water, ice, snow and the color red.

In the end, the Chinese water god, with red hair, the head of a human and the body of a snake, won the competition, and its name was submitted to the IAU. In late February, the Minor Planet Center of the IAU accepted the name and updated its catalog.

Gonggong is the fifth-largest dwarf planet detected in the solar system so far. Can we see Gonggong at night? The answer is no because it is too far away from Earth.

Scientists estimated the planet has a diameter of 1,230 km, 35 percent of the moon's diameter, and its weight is only 2.4 percent that of the moon. It rotates very slowly, with a period of 44.81 hours.

In Chinese mythology, however, Gonggong was a short-tempered god, who always created chaos, leading to floods and landslides. 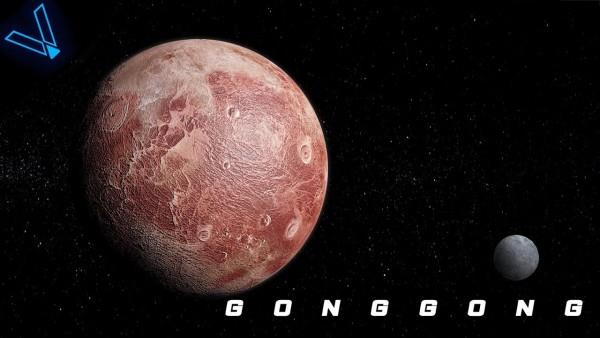