SEOUL, March 9 (CNA) - South Korea, which has one of the world's largest coronavirus totals outside China, on Monday (Mar 9) reported its smallest daily rise in cases for two weeks.

A total of 248 cases were confirmed on Sunday, the Korea Centers for Disease Control and Prevention (KCDC) said.

The increase took its total to 7,382. Each morning, the South announces how many cases were diagnosed the previous day, and gives an update every afternoon with the current day's figures so far.

Sunday's figure fell for the fourth day in a row and was the lowest since late February.

The South was the first country to report significant coronavirus numbers outside China, where the disease first emerged.

But in recent days the focus of global concern has been moving towards Italy and Iran, a quarter of Italy's population in lockdown Sunday as Rome announced infections soaring past 7,000 and deaths spiking to 366.

The South has had 51 deaths, according to KCDC. Specialists say a key factor behind the South's much lower fatality rate from the virus relates to the pattern of people being infected.

Most of the South's cases are connected to the Shincheonji Church of Jesus, a secretive religious group often accused of being a cult, many of whose members are women in their 20s and 30s.

But global figures show the virus is most deadly among older population groups, and in men in particular.

Scores of events in the South - from K-pop concerts to sports matches - have been cancelled or postponed over the contagion, with school and kindergarten breaks extended by three weeks nationwide.

South Korea has also conducted one of the most ambitious coronavirus testing programmes in the world, with thousands of people being tested every day.

Facing shortages of face masks, the government will impose a rationing system to limit the number of masks each person can buy each week, starting on Monday.

On Sunday, South Korea's Prime Minister Chung Sye-kyun issued a public message, asking citizens to "actively cooperate" with the efforts to make sure healthcare workers and sick people have access to enough masks.

"Even if you feel inconvenienced, I ask you to show a mature sense of civil awareness, based on concessions, consideration and cooperation so that people who really need face masks can buy them," he said.

The government has imposed export restrictions on masks and urged factories to increase production.

South Korea has also faced an increasing number of travel restrictions, with more than 100 other countries imposing at least some restrictions on arrivals from South Korea. 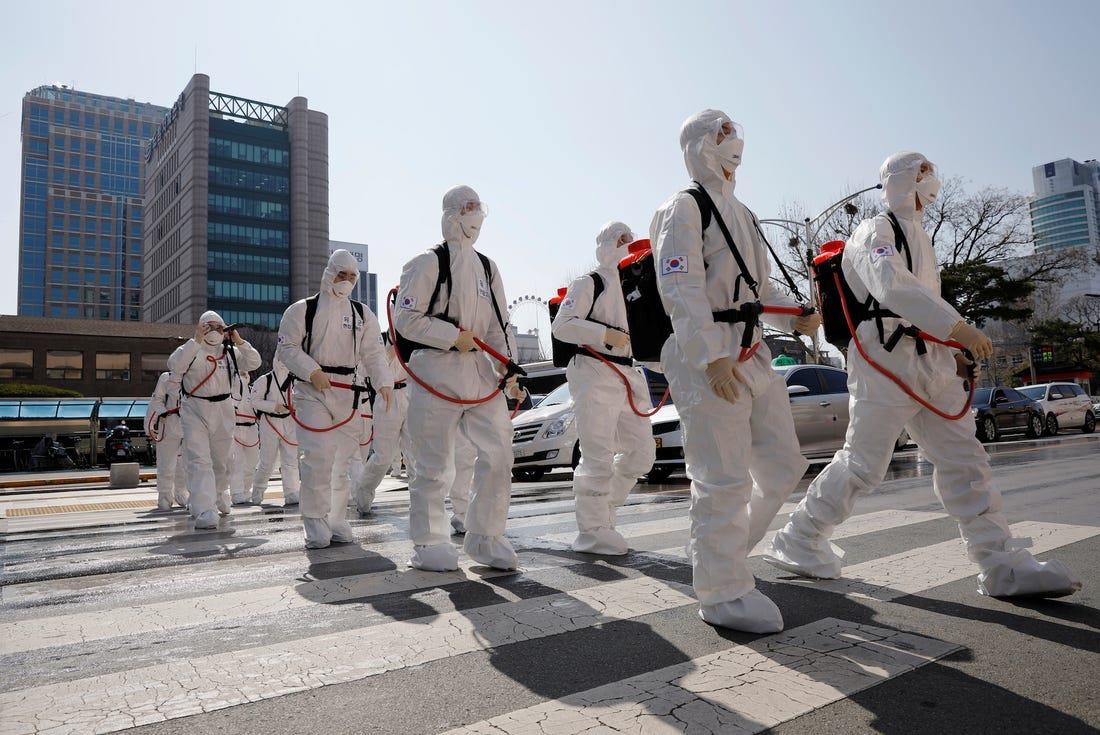