LONDON, March 23 (CNA) - Britain on Monday (Mar 23) ordered a three-week lockdown to tackle the spread of coronavirus, shutting "non-essential" shops and services, and banning gatherings of more than two people.

"Stay at home," Prime Minister Boris Johnson said in a televised address to the nation, as he unveiled unprecedented peacetime measures after the country's death toll climbed to 335.

The announcement came after outrage in government that recommendations about reducing social contact to minimise close-contact transmission of the virus were being ignored.

Crowds of people were seen enjoying weekend spring sunshine in parks and countryside across the country, prompting calls for tougher action to be imposed.

"From this evening (Monday) I must give the British people a very simple instruction - you must stay at home," Johnson said. "Because the critical thing we must do is stop the disease spreading between households."

Under the new measures, Johnson said going out to shop for basic necessities was still allowed, as was exercise, medical needs, and travel to and from work.

But shops selling items such as clothes or electronics as well as libraries, playgrounds and places of worship would be shut, with the ban also extending to weddings and baptisms but not funerals.

Parks will remain open but Johnson warned: "If you don't follow the rules the police will have the powers to enforce them, including through fines and dispersing gatherings."

He called the pandemic "the biggest threat this country has faced for decades" and said the already overstretched state-run National Health Service (NHS) would be unable to cope if the pace of transmission continues.

"I urge you at this moment of national emergency to stay at home, protect our NHS and save lives," he said.

The restrictions will be "under constant review", he added.

"We will look again in three weeks, and relax them if the evidence shows we are able to," he said.

"But at present there are just no easy options. The way ahead is hard, and it is still true that many lives will sadly be lost." 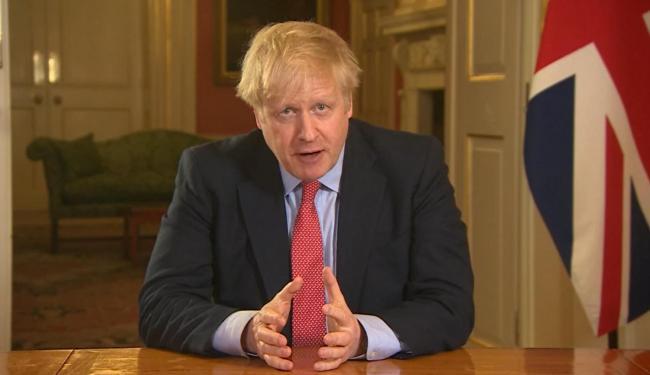