Laos Advises All Sectors to Work from Home

VIENTIANE, March 26 (Xinhua) -- Lao Prime Minister Thongloun Sisoulith has advised all local and central sectors to consider allowing their staff to work from home in a bid to prevent the COVID-19 outbreak.

"If it's possible to work at home and communicate with each other online, implement it," local daily Vientiane Times on Thursday quoted the Lao prime minister as saying on Wednesday.

He gave the advice after confirmed cases were reported in the Lao capital Vientiane and thousands of Lao workers in neighboring countries, especially Thailand, where the outbreak has been reported, rushed home and posed a challenge for prevention efforts.

Lao health officials on Wednesday confirmed the third infected person, who had close contact with one of the two patients who tested positive on Monday.

"We are in a sensitive situation. COVID-19 could infect more people," the prime minister said.

He told all local and central sectors to consider suspending meetings within their organizations or offices to avoid crowded gatherings or getting too close to one another to minimize the risk.

Representatives or officials of all sectors were suggested to avoid visiting each other and communicate online instead, said the report.

Lao health officials are tracking places and accommodations where the infections visited as well as close contacts in an attempt to control the outbreak.

Health authorities in provinces have monitored and checked incoming workers. Those with high temperature were isolated and tested, but those without COVID-19 symptoms were suggested to impose self-quarantine at home for 14 days. 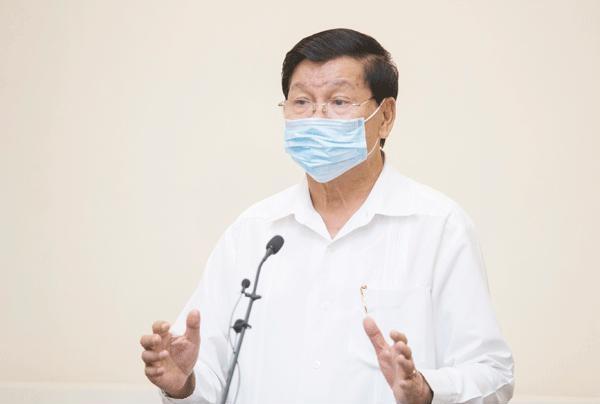