Coronavirus: Spanish Doctors are Forced to Choose Who to Let Die

MADRID, March 26 (Bloomberg) - In the emergency room at one of Madrid's biggest hospitals, Dr Daniel Bernabeu signed the death certificate for one patient and immediately turned to help another who was choking.

People are dying in waiting rooms before they can even be admitted as the coronavirus pandemic overpowers medical staff.

With some funeral services halted in the Spanish capital and no space left in the morgues, corpses are being stored at the main ice rink.

Intensive-care wards overflowing and new rules dictate that older patients miss out to younger people with a better shot at surviving, Dr Bernabeu said by telephone.

"That grandpa, in any other situation, would have had a chance," he said. "But there's so many of them, all dying at the same time."

As Covid-19 sweeps the continent, the focus is turning to Spain, with dire warnings for parts of Europe such as Britain that only recently took more comprehensive action.

The number of fatalities in the country of 47 million people is now rising faster than it did in China, where the virus first emerged, and in Italy, where the disease took hold this month.

Spanish authorities reported another 738 people had lost their lives, making it the deadliest hot spot on Wednesday (March 25) while elsewhere, countries unveiled more measures to deal with the economic carnage.

The daily count of fatalities dropped to 655 on Thursday.

Prime Minister Pedro Sanchez, who less than three weeks ago was still brushing off the threat of the virus, has warned the population that most of them have never experienced a threat of this scale.

"Only the oldest, who knew the hardships of the Civil War and its aftermath, can remember collective situations that were harsher than the current one," he said on March 14 as he imposed a state of emergency with loudspeaker drones buzzing around Madrid ordering people to get inside.

"The other generations in Spain have never, ever had to face as a collective something so hard," he said.

At La Paz hospital, the sprawling complex of 17 buildings where Dr Bernabeu works, there were 240 people in the emergency room at one point on Tuesday waiting to be admitted.

Doctors on the front line are not wearing full protection, just a cotton robe and a mask. They have the recommendation to keep 1m of distance with patients, but that's impossible.

"Colleagues are falling sick around us," Dr Bernabeu said. "I'm a radiologist, I'm not supposed to be in ER, and yet here I am in the trenches."

On March 8, PM Sanchez was encouraging Spaniards to join a mass demonstration in support of international women's day despite the lockdown that had been imposed in northern Italy.

The country had 589 confirmed cases of coronavirus at that point and four people had died.

Some 120,000 people joined the event in Madrid that day, including several ministers and Mr Sanchez's wife, Begona Gomez.

The government advised that the virus was still in a containment phase in Spain.

Since then, Ms Gomez has tested positive along with Equality Minister Irene Montero and Deputy Prime Minister Carmen Calvo, who is 62 and has been hospitalised since Sunday.

By the next day, the number of confirmed cases had doubled and Mr Sanchez and Spain were swept up in a spiraling, deadly contagion as the virus ran out of control.

He imposed a lockdown less than a week later. The initial days were dizzying as Spaniards came to terms with unprecedented restrictions on their daily lives and Mr Sanchez tried to gear up the healthcare system for an avalanche of cases.

With a critical shortage of intensive care beds, ventilators and protective gear, doctors feared they would be overwhelmed.

And, in a stark warning to other European governments, so it came to pass. In several care homes for the elderly, staff abandoned the residents to their fate.

Army units mobilised to disinfect the facilities found some patients lying in squalor and others remaining where they had died in their beds, Defence Minister Margarita Robles said on Monday.

The Health Ministry admitted that it didn't have the capacity to administer enough tests to track the spread of the contagion.

Doctors and nurses, meanwhile, are left to improvise as patient after patient arrives. Some tape garbage sacks to their arms to shield themselves.

One nurse in the emergency room at a hospital in the Basque city of Vitoria said last week that protective plastic glasses are of such poor quality that medics can barely see through them when they feel for pulses.

Some 4,000 medical workers have been infected, the government said on Monday, about 12 per cent of the total.

A nurses' union in the Basque region is blaming the shortages for the death of a 52-year-old member.

The hope is that stricter efforts to keep people at home will start to bear fruit.

Italy recorded marginally fewer new cases of the virus on Wednesday after three weeks of lockdown.

Some 635 people have been arrested in Spain for breaching the terms of the quarantine and almost 77,000 have been sanctioned by the police and the civil guard.

Talk among business leaders grappling with the economy in freefall is that the lockdown could last up to eight weeks, rather than the four the government has mandated so far, according to one Spanish official, who asked not to be identified by name.

Unemployment, Spain's perennial weakness, is set to spike again, with the summer tourist season looking increasingly like a writeoff after record revenues in recent years.

The government has acquired 640,000 rapid-testing kits.

Over the weekend, the authorities delivered 1.6 million masks bringing the total to four million since March 10.

Across the country, officials are rooting out the ventilators needed to keep the most critical patients alive -from hospital recovery units, operating rooms and military facilities.

Universities, companies and even individuals are using 3D printers to manufacture more ventilators and protective glasses.

The army has set up a field hospital in the giant convention centre on the outskirts of Madrid. It already has 1,400 beds in service and will have 5,000 when it's completed this weekend.

This weekend will mark two weeks since Mr Sanchez imposed the state of emergency, a key milestone for the incubation period for the coronavirus.

That means the growth in new cases could start to slow.

For the doctors and nurses fighting to cope, it has to.

La Paz hospital freed up some space on Wednesday by turning more waiting rooms into Covid-19 wards. Next will be the main reception hall.

But in the meantime, the triage rules for access to intensive care are getting tougher and tougher.

These places are kept free for the increasing number of young patients, whose lungs tend to collapse very fast. 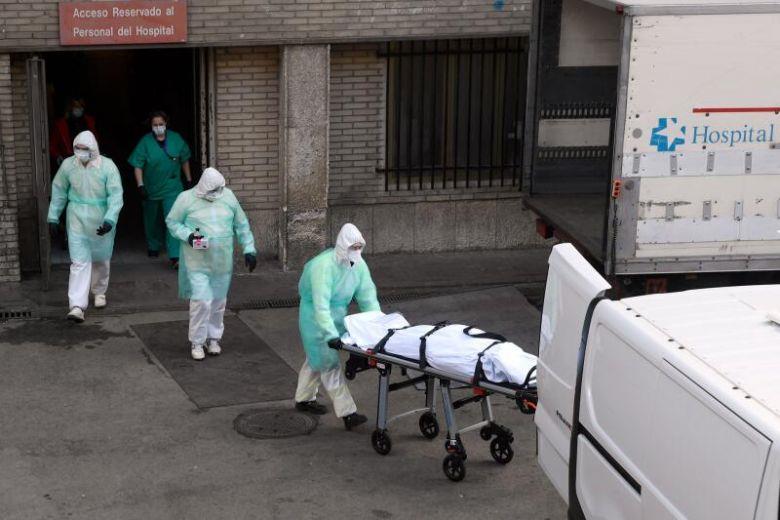