MANILA, April 2 (Rappler) – Philippine Ambassador to Lebanon Bernardita Catalla died in Beirut, Lebanon early morning of Thursday, April 2, due to COVID-19, the disease caused by the novel coronavirus. She was 62.

The Department of Foreign Affairs (DFA) confirmed this in a statement on Thursday.

"With deep sadness, the Department of Foreign Affairs announces the untimely demise on April 2, 2020, of Ambassador Bernardita Catalla, Philippine Ambassador to Lebanon, from complications arising from COVID-19," the DFA said.

Catalla is the first career diplomat in active service to have died from the deadly coronavirus.

Having served in the government for 27 years, Catalla held key posts like Kuala Lumpur and Jakarta, and was Passport Director where she delivered frontline service to millions of Filipinos, the DFA said.

Before her assignment to Lebanon, Catalla was Consul General to Hong Kong, where hundreds of thousands of overseas Filipinos resided for work.

The DFA highlighted her work spearheading the voluntary mass repatriation program of the Philippine Embassy in Beirut since December 2019.

Foreign Secretary Teodoro Locsin gave his condolences as he hailed Catalla for her work in the foreign service.

"I extended her for a great job in a difficult post. I promised her Paris so she’d hang on. But she just laughed, 'Now I must learn French,'" Locsin shared on Twitter.

"Bernie, as Ambassador Catalla was fondly called, has always lent a helping hand, to her family, friends and colleagues. Her ever ready smile and infectious laughter may have been extinguished but her dedication to our country will always be there as a guiding light for all members of the Philippine foreign service," the DFA added.

Locsin said Catalla's remains will be received with an honor guard and that he would nominate her for a Gawad Mabini and Sikatuna awards, conferred on Filipinos who have rendered distinguished foreign service. 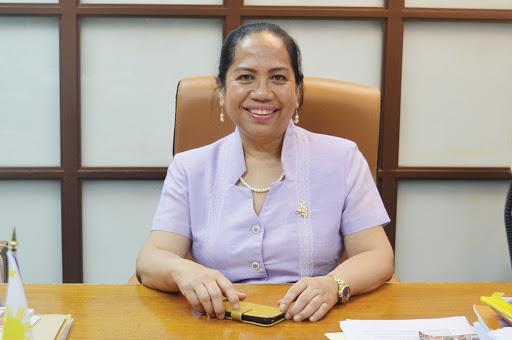