CALIFORNIA, April 23 (CNA) - COVID-19 was already circulating in California in January, weeks earlier than thought, and early deaths were likely mistaken for the flu, a county health official said on Wednesday (Apr 22).

A 57-year-old woman had died of COVID-19 on Feb 6, far earlier than any other reported cases in the United States, said Sara Cody, the health officer in Santa Clara County, California.

The earliest death attributed to the coronavirus was previously thought to be on February 26 in Washington state - a man in his 30s who returned from the disease's epicenter in Wuhan and reported himself to authorities after experiencing symptoms.

News of the deaths in California could improve public health officials' understanding of how the outbreak took hold in the United States.

The county had previously identified its first case of community transmission - infectious spread among people who had not been to China or other early hot spots - on Feb 28, Cody said. But none of the three patients who died had travelled.

Because the region was undergoing a bad flu season at the time, many cases may have been misclassified as influenza, she said.

The cases were likely "iceberg tips," Cody said, indicating that many more people were also infected.

The three cases were discovered because the county medical examiner's office was not satisfied that it had found the correct cause of death, Cody said. Because coronavirus tests were not available, they saved tissue samples, which they sent to the CDC.

The coroner said they expected to identify more coronavirus-related fatalities in Santa Clara.

The testing parameters at the time by the CDC restricted testing to individuals with a known travel history and who sought medical care for specific symptoms.

US coronavirus deaths topped 46,000 on Wednesday, doubling in a little over a week and rising on Tuesday by a near-record amount in a single day, according to a Reuters tally.

The United States has by far the world's largest number of confirmed coronavirus cases at more than 820,000.

A study this week led by Bhattacharya at Stanford indicated that the novel coronavirus was likely far more widespread than official figures suggest.

Blood samples taken from 3,300 volunteers in Santa Clara County showed the true number of COVID-19 cases was at least 50 times higher than the number of confirmed infections in the county. 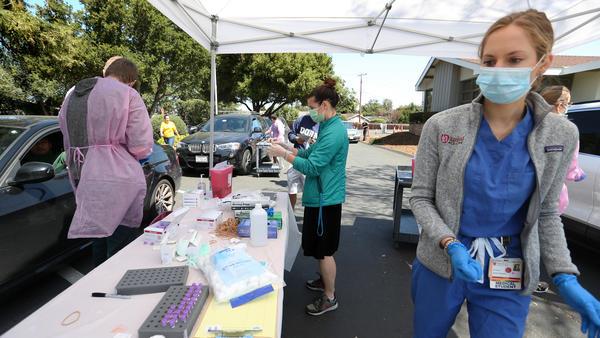